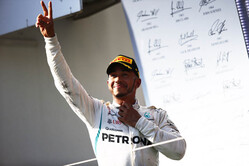 The Ferrari of Sebastian Vettel used an alternative one-stop soft-ultrasoft strategy to finish second from fourth on the grid. A similar strategy was used by Red Bull's Daniel Ricciardo to climb from 12th to fourth. The other Ferrari of Kimi Raikkonen went for a two-stopper, finishing on the podium.

Track temperatures were extremely high throughout the grand prix, having peaked at 60 degrees centigrade just before the race start.

All the teams apart from Haas will now remain in Hungary for the second in-season test on Tuesday and Wednesday, with Toro Rosso running a second car for two days to assess Pirelli's 2019 prototype tyres.

Mario Isola: "With a wet qualifying session yesterday, the teams had a free choice of slick tyres to start the race, which led to some split strategies. In particular, Vettel went in a different direction from his key rivals, which enabled him to make progress from his grid position, as was the case with Ricciardo as well. The data that the teams collected from Friday was reliable enough to formulate their race strategies, with the track having effectively reset itself after the rain. Consequently, we saw a few different tactics throughout the field, with the teams making good use of all three compounds, which stood up well to track temperatures that were close to the highest we have ever seen."