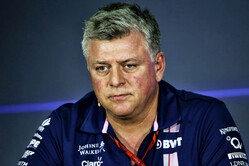 Following reports in the German media that Force India was on the verge of going into administration ahead of a possible takeover, the team's chief operating office, Otmar Szafnauer admitted that such a move was a "possibility".

"There is a high correlation between critical financial situation and the sporting situation," said Szafnauer at today's press conference. "The more money you have in this game, usually the better you do.

"Hopefully that will be solved soon," he added, "and we'll get back to operating in the normal manner that we are used to.

"We are just in this critical period, which might last a week or two, we have to keep our heads down, do the best we can here, go enjoy, after the test, enjoy our break and then come back fighting thereafter."

Companies House website reveals that a winding-up hearing was scheduled for Wednesday (25 July), with Szafnauer revealing to reporters in Hungary that another hearing is scheduled for Friday (today).

"Within a week or at the most two, our financial future will become more clear and I believe much more secure," he said, though he refused to shed any further light on the situation.

The team, which has never been the best of funded - yet has continually punched well above its weight in terms of results - is going through a particularly difficult period at present as a result of the exploits of co-owner Vijay Mallya, who continues to fight extradition to India where he faces charges of fraud.

Having recently stepped down as a director of Force India, while dismissing claims that his team was to be bought by Rich Energy, Mallya admitted that he was willing to listen to serious offers for the Silverstone-based outfit.

While most of the paddock speculation links Canadian billionaire Lawrence Stroll with the team - his son currently driving for Williams - Auto Motor und Sport claims interest from a number of other potential buyers including an American businessman, a New York investment fund and current sponsor BWT.