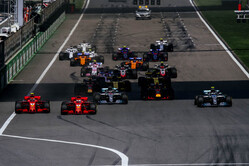 Charlie Whiting has confirmed that the engine regulations for F1 from 2021 should be presented this week.

While the current V6 hybrid formula remains, albeit with the removal of the costly and temperamental MGU-H, the FIA is seeking a formula that will see cheaper engines featuring more standardised parts.

Further changes to the current formula, including increasing the rev limit to 18,000, are aimed at increasing power and improving the sound.

Along with the proposed changes to the financial side of the sport, the 2021 engine regulations have been under discussion for almost a year, and represent one of the biggest hurdles to F1 under its new ownership.

While the initial unease of Ferrari and Mercedes has subsided somewhat, it remains to be seen how they react to the finalised proposals, and of course those concerning finance.

"The manufacturers are all involved in it," said Charlie Whiting, "so it is taking quite a long time because they are toing and froing.

Asked if he thought the June 30 deadline will be met, he said: "I think that target will be met and in great detail."

Other than appeasing the current manufacturers, it is hoped that the new regulations will encourage 'new' manufacturers to F1, with Porsche and Cosworth having been involved in the talks over the last year, while Aston Martin – currently title sponsor to Red Bull – has made no secret of its desire to enter the sport.