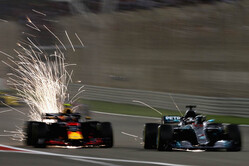 Despite the objection of a number of teams - including Red Bull, naturally - the FIA has rubber-stamped the introduction of new rules for next season aimed at improving overtaking.

Ironically, the change, which will drive up costs just two years before the sport is due to undergo a seismic change in terms of its regulations (and much more), comes in the wake of a couple of races which have featured numerous great manoeuvres. Furthermore, the new aero regulations will slow the cars by around 1.5s a lap, just two years after regulations were introduced to increase lap speeds.

"Sometimes this sport has the ability to shoot itself in the foot,'' he told Sky Sports. "The work that has been done for 2021 is all good stuff, the problem is a snapshot of that has been taken and hasn't been fully analysed and there are no proven conclusions from it.

"It has then been rushed into a set of regulations that completely conflict with existing regulations so they are now scrapping around trying to sort that out this weekend.

"It completely changes the philosophy of the car because the front wing will be wider and different," he continued. "The point that the air meets the air is the front wing and that then changes everything behind it; the suspension, the bodywork, absolutely every single component.

"We talk about costs and being responsible but what has just been introduced is a completely new concept which will cost millions and millions of pounds.''

With overtaking in 2017 50% down on 2016, when there were only 5 successful passes in Melbourne, the sport's bosses hit the panic button and began talking changes. Ironically, the three races that followed all produced good racing with plenty of passes. Horner therefore believes that it is the tracks, rather than the rules, that should be under scrutiny, that and the tyre compounds.

"Shouldn't we be looking at the tracks and the tyre compounds and how they influence races rather than burdening the teams with what will be hundreds of millions in costs.

"If you look at the nature of the circuits, long straights with big stops and hairpins like China, Baku and Bahrain they were all good races," he continued. "Those types of circuits always produce good races.

"This will probably be a boring race on Sunday because this track even with the slowest corner into the hairpin is still pretty quick and you've got a fast corner going into it.''