Hamilton: I'm punching below my weight 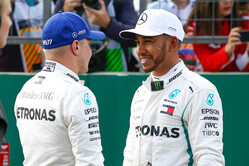 'A win is a win', they say, and though it took the appearance of the safety car, a mistake by Sebastian Vettel and a late, late puncture for teammate Valtteri Bottas, the streets of Baku finally saw Lewis Hamilton open his 2018 win account.

Indeed, while Lady Luck played a strong part in his Azerbaijan win, she appeared to look away in Australia, arguably the Briton's best performance of the year.

Speaking to reporters in Barcelona, Hamilton admits that the Baku win gives him little comfort, even if it gave him the championship lead for the first time this year.

"I have zero comfortability," he said. "Since the last race I have not thought for one second that I am leading the world championship.

"There is a long way to go," he admitted. "Imagine if I got excited now knowing that we still have all the problems. It doesn't mean anything. What is important is where you are in the end.

"If this weekend we happen to get on top of the issues we have with the car and start to be more consistent then I will be a lot happier because I know then I can punch either at my weight or a little bit above, but at the moment I am punching below my weight and that is not sufficient to win a world championship.

"We have been capitalising on circumstances like the outcome of the last race, so I will take it for now but in the long term the team cannot rely on that."

The Mercedes driver also took time to offer his advice on the proposed layout for the F1 race in Miami.

"I don't get why great golfers design golf courses but I don't think any of the top racing drivers have ever designed a race track," he said. "Miami is a super-cool place and I was very exited to hear about it but then I saw the layout and my reaction was: 'Nah'.

"I dread the thought of a street circuit we had like Valencia, which wasn't great," he continued. "It can be very hit and miss but maybe it will be a hit.

"If there is time and anyone wants to approach me or any other drivers, I am sure we can give some good insight into what the layout is like and how it could be better. I know Miami quite well and there are some better locations to put the track."