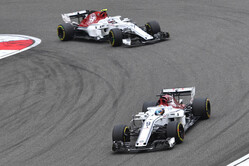 In an eventful and hectic 2018 Formula 1 Heineken Chinese Grand Prix, the Alfa Romeo Sauber F1 Team experienced two different sides to the race. Starting with a one pit stop strategy (from soft to medium tyres), Charles Leclerc showed a good and consistent pace in the first stint on soft tyres, and recovered positions, while Marcus Ericsson showed a strong midfield pace in the second part of the race on medium tyres.

The Alfa Romeo Sauber F1 Team leaves Shanghai with Marcus Ericsson having finished in 16th and Charles Leclerc in 19th place. The young Monegasque driver experienced some issues with the balance of his car, after spinning off during his second stint and picking up damage to his floor. The team is analysing the collected data and starting their preparations for the next race which will take place on the Baku City Circuit.

Marcus Ericsson: "I had a good start today, but lost a few positions after I went slightly off-track in one of the turns. Overall, the race had two phases. The first part was on soft tyres; I was struggling quite a bit as the balance did not feel great. After changing to the medium tyres, I caught up with the lower midfield and could keep up with their pace. Once we look at the data, we can start our preparations for the next race in Azerbaijan."

Charles Leclerc: "It was not an ideal race today. I started on a set of soft tyres. I was quite happy with my pace, and managed to advance to the midfield. Shortly after I changed to the set of medium tyres, I spun into the gravel. I picked up some damage to the floor, and started having some trouble with the balance of the car. Unfortunately, I lost a couple of positions there. We will look at our data and make sure that we are ready to do the best job possible in Baku."

Frederic Vasseur, Team Principal: "The race had two different sides for us. We had both drivers on a one-stop strategy, starting on the soft, and changing to medium tyres. For Charles, the first stint was a very good one. He could match the pace of the midfield, and recover a few positions. After the pit stops, the race started to change. There was a safety car following an incident on track. The timing was not ideal for us, as our competitors took this chance to save time during their pit stops. Shortly after changing to the medium tyre compound, Charles spun into the gravel. He flat-spotted and picked up damage to his floor. Unfortunately, not much was possible for him after that. Marcus, on the other hand, had a good pace in the second stint and felt more comfortable on the medium tyres. He recovered a few positions and delivered a consistent performance. Overall, the race pace is there and we can see that we can get in the fight within the midfield. We still have some improvements to make for qualifying. That is the next step, and we look forward to the next race."