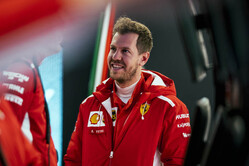 Looking ahead to the season opener in Melbourne, where he proved victorious twelve months ago, Sebastian Vettel admits doubt at rivals test pace.

While Ferrari set the two fastest times, Daniel Ricciardo was 0.865s off the pace on the same compound while Max Verstappen's best time (2.660s off the pace) was posted on softs. Both Mercedes drivers were over 1.2s off the pace, and while much has been made of the fact the German team never ran with the hypersofts - on which Vettel posted his best - during race sims the Silver Arrows were said to be around a second a lap quicker.

"Our competitors - Mercedes and Red Bull - used one type of tyre for their race distance simulations, which is something you can't do in a Grand Prix," said the German. "This has an impact on the strategies and ultimately on the result."

While Mercedes completed the most laps, barely missing a beat throughout the entire test, Ferrari completed 929, suggesting that other than pace the SF71 has reliability.

"We, too, did a good job in terms of mileage, totalling some 4,323 kilometres of running," he said. "I have a personal best of 188 laps in one day, which is 875 Km and a total of nearly three thousand! We did not experience any major issues with the car, and I had fun driving it."

Asked about blistering, which appeared to be a problem for some of the teams in Barcelona, he said: "I think it's quite normal that, after the first few days of testing, every team tries to get the tyre supplier to go in the direction that suits their car best. We think Pirelli has done a good job with their compound selection.

"We're starting from a good base, now we'll have to work on development to further explore and improve its potential," he said of the SF71. "I have a lot of confidence in our team, I know how skilled and committed the guys in Maranello are.

"I can't wait to be in Australia, because once we get on track there, we will all be driving and racing under the same conditions," he concluded. "And, as I said before, I have confidence in our car."