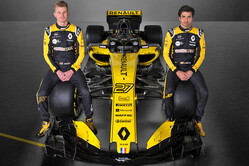 What could be possible in the season ahead?
Nico Hulkenberg: We know what we want to achieve, but it's a competitive sport and we know there are other teams out there with the same aspirations. We won't know how good a job we've done with our car as everyone else has also been working hard on their car over the winter.

This is what makes testing so interesting, and it's when we're on track that we'll see how much progress has been made in the off-season.

How will your second season with the team be different from your first?
NH: You want every season you contest to be better than the one before. 2017 was my first with the team, and there's an element of learning different processes and personnel, but ultimately the goals are the same. For this year we want to build on the good position we built last season. 2017 was about bedding in, now I want to get ready to go. I get a good feeling, we have put a lot of work in over the winter and hard work usually pays off. I'm eager to get out there. Put me in the car.

How different is the team relative to where it was a year ago?
NH: It's bigger and there are more buildings in Enstone. The team is growing and it's a rewarding experience to be part of this growth. The factory facilities are being improved and modernised. Everything is heading in a healthy direction and at healthy speed.

On track what differences do you expect to see?
NH: Hopefully we'll be battling for positions a bit further up the order. The cars will look quite similar apart from smaller shark fins and the addition of the halo. I like the look of the R.S.18 and I know everyone at Enstone and Viry has been dedicated to improving all areas of the package.

When we race, we'll have new tyres and I'm looking forward to some softer allocations for Grands Prix. This should mean more opportunities for multi-stop races, which should make things more interesting.

How do you rate the Renault Sport Formula One Team driver line-up?
NH: It's strong. There's a young, hungry and good driver who's on the other side of the garage and he'll keep me on my toes! Hopefully I can show him a few tricks too.

What's your overall approach to the season ahead?
Carlos Sainz: The general approach is to work harder every day to continue on a positive trend. For sure the main target is to take a step forward, both me as a driver and the whole team. It's difficult to predict how big that step will be, however, I'm confident as I have been pushing hard during the winter and I know everyone at the factory are giving their very best. I'm convinced this is going to be an exciting season.

How much do you feel part of the team?
CS: Renault is like a big family and I feel very comfortable around everyone in the team. I came to Enstone for the first time in October and since returning in January it looks like a whole new place. There are new people, new machines, new buildings and construction going on. It's getting really big and you can see people are really pushing to get the team back to the top. Everyone at the factory buys into that, which is the only way to become number one again. As a driver, to see all this is really motivating!

You joined the team late in the 2017 season; how much more is there to come from you?
CS: It was a positive four races with the team last season. Between Nico and myself, we helped the team get that sixth place in the Constructors' Championship. I think it was worth it and has helped me to prepare better for the upcoming season. Now I go to testing knowing my engineers and mechanics better, gathering more knowledge on the car and being able to adjust more things to my preferences. This way I can focus on finding a strong base line to start the championship on the right foot.

What have you done in the off-season?
CS: In December I enjoyed some rest, spent lots of time with my family and friends and planned the training camps for 2018 with my team. Since 2nd January onwards I returned to a strict training schedule and a corresponding diet to meet the demands of that. Motivation has been at the highest levels since the year started and that really helps during a thorough preparation. I also had the chance to have a go at a stage of the Monte Carlo Rally, in a New Mégane R.S. which was a real bonus!

In visual terms, the biggest change for 2018 will be the halo; what are your thoughts on it?
CS: I think it can be an effective device. As drivers, we will have to adapt to it, 20 laps or so in testing should be enough time. The engineers will see how it affects aerodynamics. I have seen the work done in the wind tunnel back in the factory but now we need to test its behaviour on track. Visually, I don't think the halo looks too bad once it has been integrated in the car. We will all get used to it and it will be normal fairly quickly.

The pre-season is on home ground in Spain; how are you looking forward to testing?
CS: I'm really looking forward to it. If everything goes to plan, eight days in testing means a lot of laps. There is a lot to learn and many different set-ups to try, which is always challenging and exciting for both drivers and engineers. Nico and I follow similar directions, I see positives from that too.

What are your initial thoughts on the Renault R.S.18?
CS: The design looks really promising. You can tell the guys have been pushing hard and doing their homework on it! There's a lot of detail and that's very encouraging to see. I can't wait to jump into it and start sharing feedback with the team.