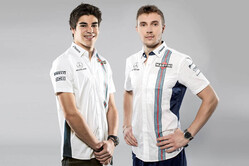 The Grove outfit will take the wraps off its 2018 contender, the FW41, on 15th February, a full week before Mercedes and Ferrari reveal their cars.

Furthermore, while most teams appear to be opting for a Barcelona reveal or on-line presentation, Williams will present its car at a special event in London.

Following a highly disappointing 2017 which saw the multi-champions finish fifth for the second successive season, over 100 points behind Force India, much is expected of the new car, the first fully under Paddy Lowe's influence since he left Mercedes at the end of 2016.

Other than the car, there will be great interest in the team's driver line-up for 2018, which features two of the youngest and most inexperienced drivers on the grid, while Robert Kubica takes the test and reserve role.

The unveil takes place over a week before the opening test at Barcelona.

Other than Williams, Mercedes and Ferrari (both 22 February), the other confirmed launches are McLaren on the 23rd and Toro Rosso on the 25th, though the STR13 will actually break cover a couple of days earlier at Misano.