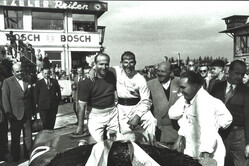 Widely considered the greatest driver to have never won the Formula One World Championship, Sir Stirling Moss, who finished runner-up four times and third three times, has, at the age of 88, officially announced his retirement.

Writing on his father's website, Sir Stirling's son Elliot announced: "To all of his many friends and fans around the world, who use this website for regular updates, my father would like to announce that he will be closing it down.

"Following his severe infections at the end of 2016 and his subsequent slow and arduous recovery, the decision has been made that, at the age of 88, the indefatigable man will finally retire, so that he and my mother can have some much deserved rest and spend more time with each other and the rest of the family.

"The entire and extended Moss clan thank everyone for all their love and support over the years and we wish you all a happy and prosperous 2018."

Between 1951 and 1961, Moss contested 67 Grand Prix, winning 16 of them with Mercedes, Vanwall and Rob Walker's privately entered Lotus and Cooper.

As was the norm in that heady era, he raced every weekend, and when he wasn't driving an F1 car he could be found at the wheel of all forms of racing machinery all around the globe, famously winning the Mille Miglia in 1955 and twice finishing runner-up at Le Mans.

His F1 career came to an early end in 1961 when he almost lost his life in a non-championship F1 race at Goodwood.

In a week our sport has lost the legendary Dan Gurney, we are delighted that Sir Stirling - a man our own Mike Lawrence unashamedly refers to as 'God' - is to take it a little easier from now on.