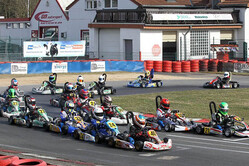 Originally named in honour of Wolfgang Von Tripps, who perished at Monza in the 1961 Italian Grand Prix, the Kerpen track is where Schumacher - who reportedly owns a two-thirds stake in the facility - his brother Ralf, Heinz-Harald Frentzen and Sebastian Vettel got their racing careers underway.

However, plans to mine for coal in the area mean the famous kart track, which hosted its first events in 1965 and was built by fans in honour of Von Tripps, is to be torn up.

The situation is not helped by the fact that in recent years membership has dropped to around 550, the club admitting that interest from youngsters has waned in recent years.

As a result, though there is the possibility of the track being relocated this currently looks unlikely to happen.

"There will be no new track," Ralf Schumacher told Cologne daily newspaper Express. "A joint search with (German utilities provider) RWE has not led to a new location being found.

"It's a shame," he admitted, "both a tradition and a successful youth venture are dying at the same time."

While compensation has been offered by RWE, club president Gerhard Noack insists: "What we need is a karting circuit, without one there won't be a club anymore."