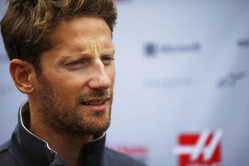 Both drivers rallied in the 55-lap race around the 5.554-kilometer (3.451-mile), 21-turn track, with Grosjean starting 16th and Magnussen recovering from a first-lap spin that put him last in the 20-car field.

Grosjean's forward drive was highlighted by a spirited battle with the Williams of Lance Stroll. The two combatants vied for 13th place over the course of six laps, with Grosjean launching the first salvo on lap six as he passed Stroll in the first chicane, only to have Stroll get the position back on the following straight. This scenario played out again on lap 10, with Grosjean getting past Stroll momentarily before Stroll took back the spot. Grosjean finally made his move stick on lap 11 with a savvy move around the outside of Stroll in turn 11 after running wheel-to-wheel in the preceding corners. Stroll pitted shortly thereafter, having flat-spotted his tires during the scrape with Grosjean.

Magnussen, meanwhile, put forth a tenacious effort, attacking from the moment he righted his Haas VF-17 after spinning in turn three. He climbed to 14th before making his scheduled pit stop on lap 22, swapping his Pirelli P Zero Purple ultrasoft tires for a new set of Red supersofts. This dropped Magnussen to 19th, but he resumed his attack, rising to 13th by lap 32 and holding the spot through the checkered flag.

Grosjean followed the same pit strategy as Magnussen, stopping for service on lap 32 where his ultrasofts were changed for supersofts. After rising to as high as ninth as drivers ahead of him pitted, Grosjean returned to the race in 11th, maintaining this position for the remainder of the race.

Haas F1 Team ends its sophomore season with a respectable eighth-place finish in the constructors standings, outpacing McLaren (ninth) and Sauber (10th). The 47 points Haas F1 Team earned in 2017 are 18 more than the total earned in its debut season in 2016. Grosjean wraps the year 13th in the championship standings with 28 points and Magnussen finishes 14th with 15 points.

With the 2017 FIA Formula One World Championship officially complete, teams turn their full attention to 2018. While the season-opening Australian Grand Prix won't take place until March 25, plenty of work will happen between now and then, with preseason testing Feb. 26-March 1 and March 6-9 at Circuit de Barcelona - Catalunya providing the first glimpse of where teams stand prior to the 69th Formula One season.

Romain Grosjean: "I pushed really hard. I tried my best. I think it was a superb drive, but it just wasn't good enough to get in the points. I tried everything I could. With (Lance) Stroll it was a good battle - he just had a lot of top speed and a lot of straight-line power. It was very difficult to overtake him and he was defending a lot early on. Anyway, after I passed him I could open up the gap and push. We had a good race, but we have our ideas where to work on the car for next year. It's been a good year in general, and only our second in Formula One. We've learned a lot and know where to improve for our future."

Kevin Magnussen: "It's not been a bad year. Obviously, I'm a bit disappointed with today. It's frustrating to get so close to P7 in the constructors championship and not get it. We just weren't strong enough to do it, but we'll come back stronger next year. We can take a step forward. We've got a baseline now that we can work on over the winter. We know the weakness of the car and we want to improve it by a big margin for next year. We'll see how we go. I think we can do it."

Guenther Steiner: "We didn't gain a position, but still, we finished eighth like last year. With a little bit more we could've finished sixth, but 'if' and 'when', it didn't happen. We fought to the end today and we provided a lot of the race action. I think for the sport, we did well. We were always providing entertainment. Thanks to everybody, and we're looking forward to next season."