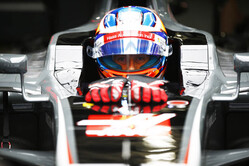 The penultimate round of the 2017 FIA Formula One World Championship began with practice Friday at Autódromo José Carlos Pace in São Paulo as teams prepared for the Brazilian Grand Prix Sunday.

With FP1 potentially being the only session of the day without the threat of rain, the decision was made to switch Giovinazzi's planned FP1 stint to FP2, affording Magnussen valuable dry track time while ensuring Giovinazzi would get his sixth planned practice outing with Haas F1 Team.

Grosjean and Magnussen subsequently attacked the undulating circuit, logging 29 and 30 laps, respectively, in FP1. The duo ran an identical program, beginning the session on the Pirelli P Zero Yellow soft tire before switching to the grippier Red supersoft compound.

Fastest in FP1 was the Mercedes duo of Lewis Hamilton and Valtteri Bottas. Hamilton earned the top spot with a lap of 1:09.202, which was .127 of a second faster than Bottas and .620 of a second better than the previous track record - a 1:09.822 set by Rubens Barrichello in a Ferrari during qualifying for the 2004 Brazilian Grand Prix.

Giovinazzi, the third driver for Scuderia Ferrari, took the wheel of the Haas VF-17 in FP2. The 23-year-old from Martina Franca, Italy, ran a total of 37 laps, the best being a 1:12.417 on his 17th lap that put him 20th overall. Giovinazzi ran exclusively on the Yellow soft tire.

Grosjean ran 39 laps in FP2 with a quick time of 1:11.300 on his 24th tour that placed him 15th. Grosjean began FP2 on the Yellow soft tire and switched to Red supersofts after 18 laps. He then returned to the softs for an eight-lap drive at the end of the session.

Hamilton and Bottas continued to lead the way in FP2. Hamilton's fast lap of 1:09.515 was .048 of a second better than second-best Bottas.

Romain Grosjean: "It was a decent Friday. We got a lot of mileage and we tried a few things on the car. The morning wasn't too bad, but the afternoon we didn't go very fast. Anyway, it was good that we had a dry Friday when everyone was thinking it would be wet. I've always loved driving here and did the best we could today."

Kevin Magnussen: "Not too bad in FP1, but we still need to sort a few things on the systems and the balance. I had four laps on the supersofts with nearly the same lap time, but it should be a one-lap tire for qualifying. Antonio ran a kind of FP1 program in the afternoon. I shared my thoughts with him and we tried to benefit from each other."

Antonio Giovinazzi: "It's a good feeling to be back in the car and to help the team again with a lot of laps. It was a difficult Friday, swapping from FP1 to FP2, but in the end we did a lot of laps and some high-fuel running. We did a few things different to what I've done before, so I'm happy with that. Again, thanks to the team for the opportunity."

Guenther Steiner: "A busy day. We got a lot done today. We swapped drivers in the morning, between FP1 and FP2, with Antonio doing FP2 and Kevin doing FP1. We got a lot of data. We need to find a little bit more speed for tomorrow. Hopefully, we can get better. The guys are looking at it all now. Otherwise, it was quite a calm day by Haas standards. No big drama, but a little bit of speed is missing."