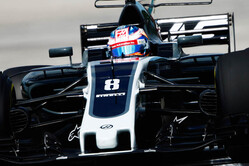 Haas F1 Team drivers Romain Grosjean and Kevin Magnussen qualified 12th and 14th, respectively, for the Brazilian Grand Prix Sunday at Autodromo José Carlos Pace in Sao Paulo. It was the fifth time this season both drivers advanced to the second round of knockout qualifying. And because of a 10-place grid penalty incurred by fifth-place qualifier Daniel Ricciardo of Red Bull, Grosjean will start 11th and Magnussen will start 13th.

Both Magnussen and Grosjean ran exclusively on the Pirelli P Zero Red supersoft tire throughout qualifying.

Taking the pole for the Brazilian Grand Prix was Mercedes driver Valtteri Bottas. His fast lap of 1:08.322 was .038 of a second better than runner-up Sebastian Vettel of Scuderia Ferrari and it set a new all-time fastest lap at Interlagos. It was Bottas' third career Formula One pole - all of which have come this season - and his first at Interlagos.

Romain Grosjean: "We tried really hard to go for it from Q2. It's a good recovery from yesterday and from previous races. We've made some good steps this weekend and I'm happy with that. Last year here we had a good qualifying and this year's is pretty decent for us. I guess the grid is going to be shuffled a little bit more with all the penalties. It's a long race and track temperature will be over 50 degrees, so cars are going to be working in a different way. We'll definitely see what we can do. Sixth in the constructors championship is still there and we're eager to get it."

Kevin Magnussen: "I think Romain got the most out of the car today. He did a good job with the car we have this weekend. I did less of a good job in qualifying. When the car is like it is - unstable in the rear - Romain is just very strong. I struggle a bit more with that. I'm not too unhappy with the result today because the car hasn't been to my driving style this weekend. We'll see what happens in the race. The race pace didn't look any worse than our qualifying pace, so with some luck tomorrow, we could be up for some more points. That's what we're aiming for."

Guenther Steiner: "After yesterday's performance I think everybody - the engineers, the mechanics - did a good job to get the cars together again and improve them. The drivers drove a good qualifying. I'm very pleased with what's happened between yesterday and today and with our result in qualifying. Tomorrow we are again in a good position to score points, and for sure we will try."