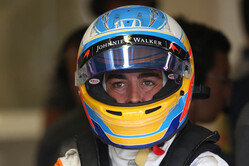 Despite successfully completing their scheduled run programmes in this morning's third practice session and posting encouraging times, neither McLaren Honda driver was able to capitalise on their morning form in qualifying.

Both drivers looked strong in FP3, Fernando in seventh and Stoffel in eighth, and driving comfortably the fourth fastest car on the grid. This afternoon, in Q1, their strong form continued - Stoffel only needing one run to ensure he was safely through to Q2, and Fernando sweeping through on his second run. Stoffel finished Q1 in 9th and Fernando in 12th.

In Q2, both drivers made slight tweaks to their set-ups to adapt to the changing track conditions as the afternoon moved towards twilight, but the limitations of their package meant it was tough to compete quite so strongly with those around them in the midfield who were able to find a little bit extra within their package.

Although they ran strongly in a closely-fought midfield, Fernando and Stoffel narrowly missed out on a spot in Q3 and will line up on the grid for tomorrow's race in 11th and 13th respectively. However, both drivers have reported better race pace than qualifying recently, and therefore hope for a stronger showing on Sunday evening as we embark on our last grand prix as McLaren Honda.

Fernando Alonso: 1th - it's what we deserved today. I don't think we were super-quick in qualifying, and it's not worth making it into Q3 to be ninth or 10th and then start on a scrubbed set, when the guy just behind you can start on fresh tyres. Tomorrow we'll be that guy, and we'll take advantage of the situation.

"We extracted the maximum, but when we get to qualifying everyone seems to have a magic qualifying mode button for their engines, so we step back a little bit.

"I'm also happy with the car balance - it has been good all weekend: we were seventh and eighth this morning and we're looking quite competitive on the long runs, so for race pace we should be there and tomorrow we have a good opportunity to score points.

"I hope tomorrow we will put on a good show and an exciting race, especially now that there's no pressure for anyone, and there are no championship points to fight for as nearly all positions are basically decided."

Stoffel Vandoorne: "I have mixed feelings after today. Final practice was pretty good this morning and we were looking reasonably strong - we were the fourth quickest team. But, as we usually see going into qualifying we don't have a magic button like the other teams to gain a little bit of extra horsepower and we lose out.

"We expected that it was going to be difficult for us today but it was very close and I think the potential was there to get into Q3. I experimented a little bit with the set-up and tried to go aggressive to find some more lap-time, but maybe it didn't turn out as it should have done and we plateaued after Q1. Saying that, I'm reasonably happy and hopefully we're going to have a good race tomorrow.

"There's only one more race to go and we're all looking forward, but the whole team is treating it like any other race and there's still an opportunity to score points. We're trying to make the most of it and hopefully we can make it a good one. Race pace has looked pretty decent in clear air recently, but qualifying is so important this year as overtaking is hard for us, so we'll have to wait and see. We know that strategy is going to be a little bit limited, so hopefully we can have a good start, a clean opening lap, and find ourselves in a strong position. We'll give it our best and we want to finish on a high."

Eric Boullier: "Like yesterday, we've seen that here in Abu Dhabi the midfield pack is extremely close, so we knew getting into Q3 would definitely be touch and go here, although we were hoping for a little bit more from our package. However, as we feared, the other cars around us were able to turn up the tools in their armoury just enough to pip us into Q3, and we narrowly missed out.

"Although we're a little frustrated that we weren't able to demonstrate in Q2 the same strong pace we saw from both drivers in FP3 and Q1 - where we were running strongly as the fourth fastest car on track - there are still positives to take from today's running. Both drivers have used their time wisely to set up their cars not only for tomorrow's race but fine-tune their packages in order to gather important data for the future.

"Tomorrow, both Fernando and Stoffel will benefit from a free choice of tyres, and, while overtaking isn't particularly easy around this track, there are still points to play for and we'll be pushing hard to finish the weekend - the final race of the season, and our last as McLaren Honda - on a positive note."

Yusuke Hasegawa: "Despite having maintained good momentum from the last few races, today's result turned out to be tough for the team.
"In FP3, the team proceeded with further set-up from yesterday and the drivers went into qualifying with a good feeling about the package. Therefore, the qualifying result was not ideal with both cars exiting in Q2 - Fernando 11th and Stoffel 13th.

"Tomorrow will be the last race for McLaren Honda. And, although today's result was disappointing, we'll start the race with our choice of tyres and from a position where we're hopefully able to fight for points.

"Our power unit performance has been stabilised in the past few races and we'll extract the full potential out of the car in order to have a good finale."