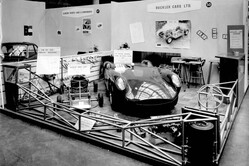 Lewis Hamilton has been in the news over tax on his private jet which he bought on the Isle of Man so avoiding UK VAT. To read some accounts, you would have thought that he personally tapped 'tax scams' into Google when his management team would have sought the advice of accountants.

Over the years, the total amount of VAT lost to the UK through private, and corporate aircraft being bought through the Isle of Man is about three quarter of a billion pounds, the practice has been going on for years. The gutter press has made out Lewis to be a bad boy while ignoring hundreds of other instances most of them involving larger sums.

Tax avoidance is legal, tax evasion is not. The popular media does not report how some owners of newspapers bank abroad to avoid, or diminish, the taxes they pay.

This got me thinking about tax and motor racing and how Jim Clark's win in the 1965 Indianapolis 500 was a great day for Alabama then internationally reviled for its racist policies. Lotus cars at Indy where not entered by Team Lotus Ltd, they were entered by Team Lotus (North America) Ltd., registered in the Bahamas. This company existed on paper and as a plaque on the side of a building in Nassau. The cars were not built in England, but in Alabama, it said so in the paperwork. Nobody has been able to locate the factory in Alabama.

Paperwork was the bugbear of postwar motor racing for years. The first Ferrari sold in Britain was owned by the truckie who brought it over, it said so in the paperwork. Four thousand pounds, in notes, in a shoebox, was handed to the truckie in a bar in London by Dudley Holland who was buying a brand new, though officially second-hand car, there being trade tariffs in place.

Just after the War, a Brit bought a sports Maserati in Italy and drove an MG to collect it. The Maserati returned with MG badges and paperwork.

Paperwork was the bane of teams competing in Europe especially if they had to travel in France, the country that gave us 'bureaucracy'. For this reason teams would fit chassis plates that agreed with the paperwork.

Denis 'Jenks' Jenkinson used to write a slim annual, 'Racing Car Review', now much prized. He stopped the series when he faced a dilemma: either fudge facts or expose Vanwall's chassis plate scam.

When it came to tax on new cars in Britain, until 1973 and the introduction of VAT, every new car was subject to Purchase Tax, the rate of which varied depending on the needs of the government. In 1948, for example, the tax was 33 per-cent on cars up to one thousand pounds, double that on cars over a grand. This explains why, when the Jaguar XK120 was announced, the list price was £998.

One thing about Purchase Tax is that it was not levied on home-made specials since the tax was deemed to have been already paid on the donor car. This loophole led to a minor industry serving special builders and to the kit car.

At the vanguard of the new DIY movement was Derek Buckler, who owned an engineering works. Derek, now a sadly neglected figure, was inspired by Henry Ford. As Ford brought motoring to the masses, so Buckler sought to make motor sport more accessible. In the immediate postwar years in Britain, motor sport was a generic activity where the one car could be used for trials, autotests, treasure hunts, rallies, hill climbs and the occasional race which was anyway likely to be a handicap.

Derek made his first special in 1947 and, soon after, began to sell multi-tubular frames to the public. These were similar to spaceframes, but without the science. The only company that had previously made such chassis was Cisitalia. Buckler was a pioneer who made a range of designs and all to a very high standard, the spaceframe of the first Brabham F1 car was made by Buckler.

Buckler also converted the Ford beam axle to independent swing axles and sold close ratio gears for the three-speed Ford gearbox. These became almost universal the 1172cc (Ford) Championship and were used by Lotus and the very first Lola.

Buckler precipitated the special building craze of the 1950s, and supplied around 400 chassis, but was soon overtaken by outfits which offered cheaper stuff that was just good enough to pass muster.

His last major contribution before his untimely death, at the age of 54 in 1964, and in keeping with his vision of motor sport for the masses, was the Buckler kart. This was very successful in Class IV (200cc, with gearbox) in the early days of the sport in Britain and, with its multi-tubular frame, it looked terrific.

Derek Buckler had paved the way for the kit car, which escaped Purchase Tax. Originally this had meant using a second-hand donor car, but the definition was eroded so that it meant a partially assembled car using new components and it was a loophole used by such as Elva, Lotus and TVR.

Almost every Lotus Elite, Elan, Europa or Seven sold in Britain was sold as a partially assembled kit. The owner had to sign paperwork to say that he had undertaken the final assembly, but that was just paperwork. There were workshops that specialised in assembling Lotus kits and customers were pointed in their direction.

In 1973, Britain joined what was then the Common Market and in order to comply it had to address a number of issues, the safety of cars being one. Another was the ditching of Purchase Tax in favour of Value Added Tax (VAT). This blocked the Purchase Tax loophole and caused Lotus to ditch its entire range: Elan, Europa. Seven and customer racing cars.

The Seven was picked up by Graham Nearn, who had a Lotus dealership, Caterham Cars. Lotus personnel found other niches; Van Diemen was the most notable in the long term.

The British racing car industry was fairly haphazard and few constructors had much idea about detail finance, it was mainly a hunch of what the market would stand. I had this from James Greasham who had been sales manager of March Engineering, the biggest player for much of the 1970s,

When Lola made cars for FF1600 it made each one at a small loss, but FF1600 production kept the workforce busy and then there were spares which accounted for around 35 per-cent of Lola's profits.

There were soft deals for drivers who could win and a mechanic might show up at any constructor to assemble a car. There was a cosy relationship known as the Build Season. Most customer cars were built during the English winter. Drivers and mechanics might spend the summer on the road, trailing an F3 or F2 car behind a VW Caravanette and then spend the off-season welding new chassis frames, say, or assembling cars.

The customer racing car business was unstable. You can make a fat living selling the tenth best dishwasher, but racing cars have to win, or at least look like they might, with the right driver. In an open market, a maker of racing cars has no way of forecasting demand and, as time went by, the cost of the car became an ever smaller part of the overall budget.

The introduction of VAT meant that a cottage industry had to be put on a professional footing, with every last upright and wishbone costed and accounted for because VAT was administered by Customs and Excise, whose powers are extensive. They had to run their hobby-jobs as proper businesses, with receipts and accountants.

Formula One teams like Brabham (then owned by Bernie), Lotus, McLaren and Surtees dropped customer cars, the market had become too unstable and production cars needed servicing and dealing with customers.

Working under different conditions, Ferrari, which had made its name in sports car racing, ended its involvement in the category at the end of 1973. We entered a new era, when the major players in F1 concentrated on Formula One.

There were other factors such as the decline of Can-Am and Formula 5000. 1973 was also the year of the OPEC oil crisis which sent the price rocketing and caused an international economic melt-down. In Britain, a strike by miners led to power outages and a three-day working week for many.

It was the year that changed the motor racing industry which had to re-invent itself and the biggest element was tax. Waiting to help F1 to do just that was Bernie Ecclestone who, in 1974, formed the Formula One Constructors' Association.

FOCA did not emerge, fully formed, overnight. Bernie had been talking to every F1 team owner and they all liked the way he did business. FOCA began with Bernie, on a modest commission, negotiating with race organisers and grew from there.

We are indebted to Simon Buckler of Buckler Cars for the pictures of the MK90 and from the 1961 Racing Car Show.