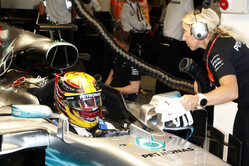 Lewis Hamilton completed a clean sweep in terms of dominating all three practice sessions, however, this morning the Briton was given a run for his money.

Seemingly a lot happier with his new chassis, Sebastian Vettel closed to within 0.092s of the Briton, while the validity of the Mercedes driver's lap is dubious as he was one of many to take advantage of the track limits - and then some - at T19.

With Valtteri Bottas and Kimi Raikkonen both within 0.27s of Hamilton, this could be an interesting session. Indeed it needs to be, for if Ferrari and Vettel are unable to halt - or at least slow - the Hamilton juggernaut the championship is lost.

Max Verstappen finished the morning fifth quickest, albeit 0.62s off the pace. However, in the wake of the decision to change his engine, thereby incurring a 15 place grid penalty the Dutchman is in many ways a bit part player this afternoon.

Indeed, with Daniel Ricciardo finishing a disappointing ninth earlier, it really does appear to be Mercedes versus Ferrari.

As expected, the battle for midfield superiority is going to be fun, not least courtesy of the ever changing driver arrangements at Toro Rosso.

While Felipe Massa was best of the rest, the Williams driver was under intense pressure from the Renault duo - where Carlos Sainz is not going to be the pushover Jolyon Palmer was - the Force Indias and McLarens.

Having spun off and beached his car in FP3, Romain Grosjean has had little preparation for this afternoon, and this on the back of a difficult day yesterday. Thankfully for the home team however, Kevin Magnussen appears hot to trot.

In terms of tyres, the softs, supers and ultrasofts are available this weekend, and as we witnessed earlier the ultras only appear to be good for one lap.

Leaving aside the issue of track limits, the other things to watch out for today and tomorrow are the numerous bumps and the wind, particularly the tailwind that is affecting the first sector.

Other than Verstappen, Nico Hulkenberg, Stoffel Vandoorne and even newcomer Brendon Hartley have incurred engine grid penalties for tomorrow.

The lights go green and Kvyat leads the way, followed by Wehrlein.

Kvyat gets things going with a 37.865, over a second slower than his previous best this weekend.

An early riser is Hamilton, who stops at the top of the hill (T1) in order to create a gap to the next car.

Grosjean goes second with a 37.724 as the cameras are on board for a scruffy lap with Hamilton.

While most are on ultrasofts, the Mercedes and Ferrari duos are on supers.

As Ricciardo goes third (35.991), Verstappen complains of traffic. "There are cars all around me," he moans.

A 36.355 sees Sainz go fifth ahead of Vettel and Hamilton.

Vettel, Hamilton and Verstappen look set to improve as they trade fastest sectors.

Alonso goes second (35.712), but is demoted when Massa and Verstappen go quicker. No sooner has Verstappen posted 34.899 than Hamilton responds with a 34.822.

"Om my god, what was he doing," cries Grosjean as he almost comes to grief in a curious incident involving Stroll who seemed oblivious to the Frenchman's presence.

Indeed, as the stewards announce they are investigating the incident, they are also looking at another incident involving Perez and Magnussen.

"What the **** is Magnussen doing, so unprofessional," cries the Mexican feeling he was impeded by the Dane.

With under four minutes remaining, Grosjean has the track to himself. He is currently in the drop zone along with Wehrlein, Ericsson, Hartley and Magnussen. Stroll, Vandoorne, Kvyat and Perez are all hovering. That's hovering, not hoovering.

The top ten appear confident and remain in their garages. A possible gamble for tenth placed Ricciardo.

Grosjean, Hartley and Magnussen all look set to improve. Kvyat and Vandoorne also.

Grosjean goes 14th, while Magnussen can only manage 18th.

While Sainz improves to 5th at the death, Stroll fails to make the cut.

Ahead of Q2, Renault reveals that Hulkenberg will not play any further part in the session as due to his grid penalty it is best to save tyres.

Hamilton is first out for Q2, followed by his teammate. It's as if the Silver Arrows want to get this done and dusted as soon as possible. Both are on the ultras.

A scruffy final sector for Verstappen, who, as a result, can only manage fourth (34.716).

Alonso goes ninth, ahead of Massa, Alonso and Vandoorne, as the Oink Panthers adopt their usual position just behind the 'big six'.

Eventually, Kvyat breaks the silence. He is followed out by Grosjean, Alonso and the Silver Arrows.

Kvyat looks set to improve, as does Vandoorne.

Kvyat fails to make the cut, while Hamilton consolidates top spot with a 33.437.

Alonso goes seventh (35.46), while Vandoorne fails to make the cut.

Quickest is Hamilton, ahead of Bottas, Raikkonen, Vettel, Ricciardo, Verstappen, Perez, Sainz, Alonso and Ocon. Verstappen's time, by the way, was on the supersofts.