Hamilton pushes it to the (track) limit in final practice 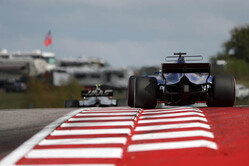 Ahead of today's sole free practice session, the air temperature is 26 degrees C, while the track temperature is 30 degrees. It is bright, sunny and warm, much warmer than yesterday.

Lewis Hamilton was pace-setter in both of yesterday's session, the Briton on awesome form, particularly in FP2 when he effectively left the opposition for dead.

Unhappy with a car that felt like "jelly", Ferrari built a new one for Sebastian Vettel overnight even though it could find nothing wrong with the old one. Then again, we all know that when something doesn't feel right, you don't feel right. Consequently, with this being Seb's 'last chance saloon', in terms of the 2017 title, his team wan him fully prepared.

Despite the jelly issues, the Ferrari is quick, but so is the Red Bull, though neither are as quick as that man Hamilton.

Then again, the warmer temperatures may well work for Ferrari and against Mercedes.

Homeboys Haas will be looking to make progress today, particularly in Grosjean's case, the Frenchman slowest in yesterday's second session.

At Renault, new boy Sainz out-paced teammate Hulkenberg, while Brendon Hartley gave a good account of himself for Toro Rosso.

Ahead of the green light, Verstappen is already at the end of the pitlane raring to go. It is believed Red Bull might have changed the engine in the Dutch driver's car, which would of course result in a grid penalty.

The lights go green and Verstappen leads Vettel, Ericsson, Grosjean and Wehrlein out into the Texas sunshine.

A good mixture of all three compounds.

While the rest head back to the pits after their installation lap, Vandoorne remains on track, the Belgian looking likely to post the first time of the day. However, at the end of his second lap the youngster heads into the pitlane.

Moments later Sainz posts 37.125 while Renault teammate stops the clock at 37.613. Could it be that Hulkenberg is finally going to be out-qualified by a teammate this year?

Pitpass is delighted to see Renault making the most of its 'Aerocat', which site proudly on either side of the RS17.

Improvements from both Renault drivers though the order remains the same, Sainz still quickest albeit now on 36.813.

All eyes on Hamilton who is clearly affects by the tailwind in the opening sector, particularly in T1. He goes quickest in S2 before completing the lap in 35.717 to go third.

Vettel improves to third, behind Raikkonen and Bottas (35.637), albeit just 0.096s off his teammate's pace.

Behind the usual suspects, and with Verstappen yet to post a time, Sainz leads the Pink Panthers, Hulkenberg and the Haas duo. That said, after 21 minutes of running only 13 drivers have posted times.

Hamilton told to make his EB switch change in T11 earlier if possible.

Red Bull confirms that Verstappen has had a new ICE and MGU-H which means a 15 place grid penalty tomorrow.

Alonso posts 36.44 to go sixth, while Vandoorne, like Verstappen and the Williams duo have yet to post times.

Kvyat is told to slow and pit after reporting that the "steering wheel got very heavy". "There's something wrong with the car," he adds.

The pressure could be getting to Vettel, heading into the pitlane he stops at the Red Bull pit. "Sorry fellas, I was looking down," he admits.

Verstappen runs very wide in T7 as the rear gets away from him, while moments later the VSC is deployed as Grosjean is off and beached in the gravel at the same corner.

"That was a really unexpected slide, massive loss of rear grip," reveals Verstappen. "The youngster is advised that it appears to be "wind related".

As a tractor is brought in to remove the Haas, the drivers head back to the pits.

The VSC is withdrawn with 23:00 remaining.

All but Stroll have posted times, though the Canadian is on track. Whether Verstappen's 2:04.251 really counts is another matter entirely.

Massa improves to seventh with a 36.260 as teammate Stroll finally posts a time, the youngster going ninth with a 36.421.

"Is anyone improving on their next laps," asks Hamilton, clearly wondering if it is only him that isn't. "Not at the moment," he is advised, which is sure to warm the cockles of his heart.

Meanwhile, drivers are continuing to push it to the edge in terms of track limits, Bottas and Verstappen among them.

Despite his best efforts Hamilton fails to improve, clearly the ultras only good for one lap. That said, courtesy of taking the proverbial in T19, he goes quickest in the final sector.

That issue with Kvyat's heavy steering wheel appears to relate to a pedal issue and it is unlikely we'll see the Russian again this session.

Magnussen is told that "Romain is not using the inside corner of number 8". In fact, after beaching his car, Romain isn't using any corners.

Perez is quickest (202 mph) in the speedtrap, ahead of Bottas, Hamilton and Ocon.

With just over six minutes remaining, the big guns head out for the final qualifying sim runs.