Hartley to be hit with grid penalty? 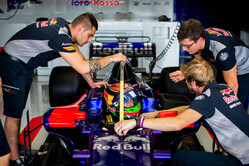 If ever proof weere needed as to just how screwed up some of the sport's regulations are, regulations that are driving current fans away and turning off prospective new fans, look no further than young Brendon Hartley.

The Le Mans and winner, and about to be two time WEC Champion, is about to make his much anticipated F1 race venue. Indeed, when he takes to the track on Sunday it will be fifty years to the day since countryman Denny Hulme won the title, edging out Australian Jack Brabham for whose team he was driving.

With the event sure to attract a whole new generation of fans down under, how does one explain that without even having driven the car, the youngster is to be hit with a grid penalty.

Ahead of the weekend, having run out of engine mileage, his team (and Renault) opted to change the engine in the back of the Kiwi's car, thereby demoting him to the back of the grid. Essentially, the rookie's race is over before he's even contested a practice session.

To add a furher twist, Hartley is driving the car Pierre Gasly took over from Dannil Kvyat, while the Russian, who returns to action this weekend, takes over Carlos Sainz' car. With that engine having completed similar mileage it is almost certain that whoever is in it next week in Mexico will take a penalty.

Indeed, there is talk that Max Verstappen could also take on a new engine this weekend, meaning the Dutchman faces a similar penalty.

Let's get ready to grumble.