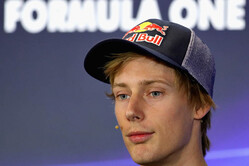 It's not many that get a second bite of the cherry, certainly where Red Bull is concerned, but this weekend, Brendon Hartley could well get his F1 career back on track.

In those first days of 2010, it was all looking so good. Brendon Hartley was named as one of two official test and reserve drivers for Red Bull and Toro Rosso, the Kiwi sharing the role with Daniel Ricciardo, the two were also confirmed as teammates at Tech 1 with whom they would contest the Formula Renault 3.5 Series.

For the first six races, Hartley and Ricciardo shared test and reserve driver duties for Red Bull and Toro Rosso, alternating race by race, however, at that stage the Kiwi was suddenly dropped from the Red Bull Driver Programme, losing his F1 and Formula Renault drives in the process, supposedly down to disappointment that he hadn't won a race in a season and a half.

2012 saw the youngster snapped up by Mercedes as test driver for its F1 team, mainly carrying out simulator work. While there had been some World Series by Renault 3.5 outings and even a few GP2 events, that year notably saw the Kiwi make his first foray into Sports Cars, contesting the LMP2 class at Le Mans with Murphy Prototypes.

The rest, as they say, is history.

On the brink of his second WEC title, and having finally won the classic Le Mans 24 Hours, a little late in the day, Hartley finally gets his real shot at the big one, F1.

Speaking to reporters in Austin today, unwilling - perhaps unable - to fully explain Red Bull's reasons for that momentous decision in 2010, the youngster admitted that perhaps he "just wasn't ready".

"I had some success in the early days, I won the Formula Renault championship, I became the reserve driver, had my first F1 test at 18 years old and I guess I just didn't deal with the pressure," he said.

"I stopped enjoying it, I wasn't happy; I was pretty young and away from home. When the Formula One dream, so to speak, stopped in 2010, I picked myself up, I found endurance racing and yeah, I have learned a lot from that experience.

"Being in the LMP1 programme, a high-profile category, where there is a lot of pressure, probably not that dissimilar to Formula One in some ways, in that respect, in development of the race car, and working with team-mates has been great. I'm a lot stronger than I was back then, basically.

While most were under the impression that Helmut Marko had approached his former protege, the truth is somewhat different.

"When it was announced that Porsche would stop endurance racing in LMP1 for next year, I called Helmut Marko and I said: 'Look, I'm a different driver than I was 10 years ago, I've learned a lot, and if there is ever and opportunity I am ready'," he revealed.

"He didn't say much, he just said he got the message, and three months later he made the call.

"This happened very quickly. I didn't know about it much sooner than the press did. It's been quite a whirlwind of a couple of weeks to arrive here. I'm pretty relaxed at the moment, all things considered. Really looking forward to getting out on track. Obviously I've had quite a bit of time to chat to the engineers, to go through some data, a little bit of time on the sim. But I'm looking forward to free practice one and see how comfortable I feel and working towards the race start on Sunday, which is a big moment for me, so yeah, really excited."

Asked if he'd sought advice from racing pals in terms of how the cars have changed since 2010, he said: "Yeah, I've obviously... all the friends I have in the sport I've been asking for a bit of advice.

"I saw Mark (Webber) this morning for breakfast. I saw Daniel (Ricciardo), who is one of my best buddies as well. I saw him two nights ago, I asked him for all the advice I could manage to get out of him regarding tyres.

"Yeah, some of it is going to come down to, like I say, driving free practice one, seeing how I go and then asking some of those questions. A lot of them aren't really relevant until I've actually experience the car."

With neither Toro Rosso seat confirmed for next season, Hartley's return may not be a one-off. However, there has also been talk of a switch to IndyCar in 2018.

"Nothing's been confirmed for me for next year, so I haven't asked too many questions and have just been focussed on trying to do the best I can this weekend because I've got a fair amount on my plate to figure out and do a good job.

"I'm trying not to think further forward. But yeah, I was looking at Indy Car and I still am. Nothing confirmed for next season yet."

Sunday, when Hartley takes his place on the COTA grid, 33 years after Mike Thackwell became the last Kiwi to contest a Formula One Grand Prix, marks 50 years to the day since one of the sport's legendary New Zealanders, Denny Hulme, secured the title driving for Brabham.

Let’s hope a little of that Denny, Bruce and Chris magic has rubbed off on their countryman.