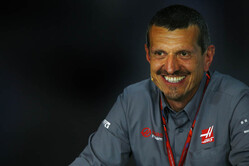 As its titanic midfield battle continues - in terms of the fight for fifth in the team standings - Haas team principal Guenther Steiner admits that further progress relies heavily on the playing field being more level, and that can only mean one thing, a limit on the amount of money teams are allowed to spend.

Speaking as the Malaysia Grand Prix weekend gets underway, the Italian admitted that rather than procrastinating, the powers that be need to act.

"To get to the big three - and now it's almost four because Renault has made immense investments - it's difficult, but then again we are all waiting for the budget cap proposal to level the playing field," he told reporters.

"I think that for everybody should be an aim," he admitted. "I see it like this; the midfield this year, everybody from fourth in constructors, would have been on the podium this year, which would have been a fantastic story to tell. It would have been nice to write, it would be interesting, but you cannot blame the big ones to do what they are doing because they can. It's like why not. If you can, you can do what you want. So I think the sport itself needs to interfere and I think Liberty will bring some proposals hopefully soon."

Minded that such move will inevitably lead to all manner of threats from the big teams as they see their superiority, budgets and ultimately sponsorship and prize money threatened, he said: "I don't know. For them, I think they realise that the sport looks healthier if you are fighting. They will, for sure, try to keep some advantage, but for them speeding the amount of money they are spending – if the investment is not worth the expense at some stage all good things have an end.

"So maybe they reign in and say maybe we make this sport more interesting but we spend lots and lots and lots of money. Should we not try to get somewhere close to keeping still a little advantage, of course they will try it – I would be doing if I would be them, or anybody would try to do. But then again it's negotiation skills.

"If you bring the field together, somebody who does a good job could stand out and get to there. Maybe not every year but at least the gap wouldn't be two seconds between third and fourth."

Asked what he believes would be a fair cap, mindful that McLaren's Zak Brown suggested $150m, Steiner said: "Between 150 and 200 dollars, not pounds. Millions, obviously! That would be somewhere to aim for.

"I don't think it will be a budget cap from one day to the other," he admitted. "It will be on a scale. You need to come down.

"I think it was talked about maybe more than 5 years ago but then it stopped. But now Liberty Media has even made a proposal, they're talking about making a proposal, but that's what I said, I hope it's sooner rather than later. That's my message as well. Maybe we talk and maybe the first step could be taking in 19, 18 it's too late. 2019 to make the first step so whenever the new contracts are done for 21, that is part of the contract and we have made our first moves already. I think that would be a nice position to be in. It is also a nice position for us to see which way to go. For us it would be crazy now to hire 200 people and the say hey, we cannot use them anyway because now we need to get rid of them."

"There is, for example, the German finance world, they control you pretty well, so I think if they can do it we can do it if we want to do it.

"If you want to find a loophole you always find a loophole and then you get caught out. But if you make the fine like in Germany and the US and you don't pay your taxes it has consequences, you're not going to do it.

"That's why I say, where there is a will there is a way. If you want to avoid it you always find away then on top you say if you do this you get punished, properly, not just a slap on your fingers."