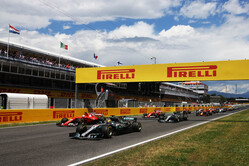 Almost all of Formula One's former owners are selling off their shares which track the performance of the sport in a transaction which is expected to close today according to an article in the Guardian by Christian Sylt.

When F1's current owner Liberty Media bought the sport's parent company Delta Topco in January for £3.2bn ($4.4bn) it trumpeted the fact that part of the payment to the sellers came in the form of shares listed on America's Nasdaq stock market. They were given to everyone who owned stakes in Delta Topco, from the FIA and Ferrari to Bernie Ecclestone and the company's controlling shareholder CVC.

The shares are known by the embarrassing-sounding name of 'FWONK' which is short for Formula One and is followed by a 'K' as that is the letter that refers to non-voting stock.

Liberty itself owns 100% of Delta Topco so the shares don't offer any stake in the company. Instead they just reflect its financial results and those of related companies in Liberty's portfolio. This portfolio is known as the Formula One Group and the better it performs, the greater the returns for shareholders and vice versa.

FWONK shares have accelerated in value despite the loss of the British Grand Prix and the Malaysian Grand Prix, the threat of a corruption investigation surrounding F1's governance contract and the Formula One Group making a £95 million net loss in the first six months of this year as previously reported.

The Delta Topco sellers got the shares at the pre-takeover price of £15.66 ($21.26) but they have risen a staggering 76.2% since then and closed yesterday at £27.58 ($37.45). It sounds like the dream investment but, as any advisor will tell you, past performance does not necessarily predict future results. The big question for shareholders, or prospective buyers, is whether the shares will keep on increasing in value. If they are likely to continue on an upward trend the last thing you want to do is sell but that is exactly what almost all of the former Delta Topco shareholders are doing. They aren't the only ones.

Former Delta Topco shareholders including Bernie Ecclestone, his Bambino family trust, Martin Sorrell and JP Morgan have all put their entire stakes up for sale. So has Ian Holmes who is currently F1's global director of media rights. Even Liberty's management have taken advantage of the accelerating stock price. Its chief financial officer Mark Carleton has sold all of his FWONK shares and has made £1.8m ($2.5m) from doing so since the F1 acquisition.

As the Guardian points out, perhaps ominously, F1's teams have steadfastly resisted opportunities to buy FWONK shares which would give them a long-term interest in F1. They are the stakeholders that F1 needs on-board most in the long run. This is because all of Liberty's contracts with the teams expire at the end of 2020 so, as things stand, it only has three and a half years of guaranteed income. The teams didn't just decline the shares once, they turned them down again when they were offered an even better deal.

A total of £1.2bn of the cash paid to F1's former owners by Liberty came from seven American investment funds which bought 29.4% of FWONK's stock in December at the discounted price of £18.41 ($25) per share. Just one month later the teams walked away from a chance to buy it at £15.66 ($21.26) when it was trading at just over £22 ($30). Liberty gave them less than a month to buy £810.1m ($1.1bn) of stock but there were no takers. The shares on offer were the ones given to Delta Topo's former owners so it left them with less cash than they had hoped for.

To compensate, Liberty itself acquired £294.6m ($400m) of the stock and offered it to the teams with a deadline of 23 July, by which time it was trading at £25.73 ($34.94). However this plan also skidded off track and the shares had to be retired after none of the teams snapped them up. After today's sell off there will be even more F1 stakeholders who don't own shares. Given that they have accelerated in value, and the media has eulogised about what Liberty brings to F1, one has to wonder why some of the sport's most significant stakeholders don't want to own stock.