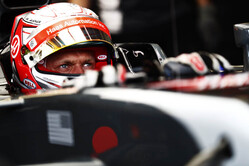 The 14th round of the 2017 FIA Formula One World Championship began with practice Friday at Marina Bay Street Circuit as teams prepared for the Singapore Grand Prix Sunday night.

Giovinazzi, the third driver for Scuderia Ferrari, took the wheel of the Haas VF-17 in FP1 as Magnussen graciously relinquished his seat for Giovinazzi to gain some additional Formula One experience. The 23-year-old from Martina Franca, Italy, drove a Formula One car earlier this year when he subbed for the injured Pascal Wehrlein at Sauber during the first week of winter testing at Circuit de Barcelona - Catalunya and again during the Australian and Chinese Grands Prix. This was the third of seven FP1 sessions where Giovinazzi will drive for Haas F1 Team.

Giovinazzi ran a total of 27 laps, the best being a 1:46.782 on his 15th lap that put him 16th overall. Grosjean ran 20 laps in FP1 with a quick time of 1:46.456 on his 17th lap to place him 15th among the 20 drivers. Both pilots ran exclusively on the Pirelli P Zero Red supersoft tire and were the only ones to do so as everyone else sampled the Purple ultrasoft tires.

Leading the way in FP1 was Red Bull driver Daniel Ricciardo, whose fast lap of 1:42.489 was .109 of a second better than the next quickest driver, Scuderia Ferrari's Sebastian Vettel, and broke the previous track record held by Nico Rosberg - a 1:42.584 set last year with Mercedes in Q3.

Speeds picked up and lap times continued to drop in FP2. Magnussen returned to his Haas VF-17 and wrapped FP2 as the 17th-quickest driver with a time of 1:44.417, the best mark recorded by Haas F1 Team Friday at Marina Bay. Magnussen's quick time came on the 11th of his 32 laps shod on a set of Purple ultrasoft tires. Grosjean knocked 1.528 seconds off his FP1 time with a 1:44.928 earned on his 13th lap, also while utilizing the ultrasoft tire. He ended the session 18th overall with 29 laps completed.

Ricciardo remained the fastest driver, topping FP2 with a lap of 1:40.852, which was 1.637 seconds better than his FP1 time to set a new benchmark going into Saturday's FP3 and qualifying sessions. Just behind Ricciardo was his Red Bull teammate, Max Verstappen, who was .556 of a second off Ricciardo's quick time.

Romain Grosjean: "It was a tough day. Singapore is a challenge on its own - for the mechanics, the drivers and the cars - with all the heat and humidity. We've been struggling all day to get the best out of it. I think we've made some progress on the rear end of the car, but we still need to get the front end to work. That's something we've been struggling with at street circuits like Monaco, but we eventually found it in qualifying there. Not much feeling with the front end - I'm struggling to get the best out of it. I think tonight we're going to try a few things for tomorrow and hopefully get the right answer."

Kevin Magnussen: "Obviously, the pace wasn't great. We need to work on that and see if we can find some more pace. Otherwise, it's going to be difficult for us this weekend. I think we have some stuff to work with, it's just whether it will be enough, but we'll see. It was good fun to drive here, but our main priority is to be competitive."

Antonio Giovinazzi: "First of all, thanks to Haas and Ferrari for this opportunity. It was an important session for me. The last time I drove the car was the beginning of August, so to come back in the car and at a difficult track like Singapore - it was a difficult experience but I really enjoyed the track. It was amazing. I'm really happy. I did the best job for the team. We did all the laps we could do, so I'm really happy with the session. Of course, missing Monza was disappointing because it was in front of my fans, but in the end, I'm really happy to swap Monza with this track as I got to learn a new track and gain a new experience."

Guenther Steiner: "Not an easy day today. We're still trying to find a setup that the drivers like while getting the tires into the window where they work here. We'll keep on working at that and try to find something for tomorrow. Other than a bit of damage where Kevin hit a wheel in FP2, we got through the sessions with both cars intact. Antonio did a good job this morning. I think we've got enough data to look at. Hopefully, we can find something for tomorrow."