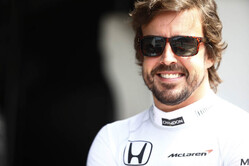 McLaren Honda recorded its most competitive outing of the season so far to score nine world championship points in this afternoon's Hungarian Grand Prix.

Fernando Alonso drove a sensational race to finish sixth; it was a performance that included a committed overtaking move around the outside of Carlos Sainz at Turn Two, and a crackling second stint on the Prime tyre, which concluded with him setting the overall fastest lap of the race, on lap 69.

Stoffel Vandoorne earned his best finishing position of the year, in 10th spot. He was briefly held up by a first-lap melee behind Daniel Ricciardo, but recovered quickly to run inside the top 10. Towards the end of the race, he battled for ninth with Force India's Esteban Ocon, crossing the line just 0.6s behind the Frenchman.

Fernando Alonso: "We were probably looking at seventh or eighth position today, but with Ricciardo out of the race, sixth place became possible, and we grabbed it. Still, we worked for that result all weekend - no mistakes, good practice sessions, strong qualifying, and then a perfectly executed race.

"There are three or four weekends in a season where we can be competitive, so we need to maximise those and fully capitalise on our potential - and that's exactly what we did this weekend. Races like Spa and Monza are going to be more difficult for us, so let's just enjoy this result and think about the difficult ones when they come.

"The battle with Carlos was a close-run thing. We were together at the start, at the restart after the Safety Car; we came into the pits together, we exited together and I knew I had two laps where I could really push and stress the new tyres a little bit.

"I tried to do that with some kamikaze moves at times because, after those initial two laps, I knew it was going to be impossible. It worked out fine. Also, the fastest lap at the end of the race was a surprise - a gift - but one we'll take! It was definitely a good race, so let's go into the summer break with smiles on our faces."

Stoffel Vandoorne: "It's been quite a positive weekend for me - we came here expecting to be competitive and we were able to run inside the top 10 for the whole weekend.

"When an opportunity like this comes up, we have to grab it with both hands - and we did. Before my stop, we were looking at the gap behind and trying to over-cut people behind us, but I made a small mistake at the stop, locked up and stopped too long.

"Nonetheless, my pace in the race was encouraging - we were definitely quicker than the Force Indias here, but overtaking is very difficult. In the end, we got points so it's a good weekend for the team."

Eric Boullier: "Today was a timely reminder that, despite a difficult season so far, at our heart we remain a passionate racing team. To score nine points and set the fastest lap of the race shows that, as soon as an opportunity presents itself, we are ready to take advantage of it.

"What can you say about Fernando's drive today, except that it was utterly sensational. He was absolutely charging out there - and, once he'd made his pit-stop and switched to the Prime tyre, he was really able to control his pace until the end.

"His pass around the outside of Carlos [Sainz] was brilliant - he knew he had to make a move stick while on fresh rubber, and he did just that. From there, he just drove away, and set a number of quick-laps before finally setting the fastest lap of the race on the penultimate lap. He showed today just what makes him so special.

"Stoffel also drove a very strong race. He didn't get a break at the start, as Ricciardo slowed right in front of him, but he drove strongly all the way to the finish. He'll be pleased to have scored a point just ahead of his home race; this is the reward for a lot of dedicated hard work and effort from both him and the team.

"As we prepare for the summer break, and the second half of the season, this result will send us away with added sense of purpose and determination."

Yusuke Hasegawa: "Today was a good day at the office for the McLaren Honda team. A double-points finish is definitely a positive step forward for us.

"After yesterday's encouraging result in qualifying, we knew we had a package capable of scoring some points. Both Fernando and Stoffel drove brilliantly, keeping their concentration in hot and tough conditions, and pushed throughout to bring home nine precious points.

"Today's result is the sum of a lot of hard work and daily efforts made by the team members, and I want to thank them all for this.

"Although we are now able to head into the summer break with good momentum, we are not satisfied with the overall results of the first half of the season. We will continue to push our development for improvement, and hope to have a good start of the second half in Spa- Francorchamps."