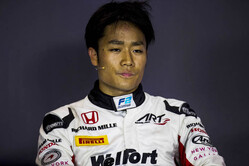 Sauber has announced that Nobuharu Matsushita will be driving the C36-Ferrari at the second in-season test at the Hungaroring following the Grand Prix.

The 23-year-old Japanese started his racing career in karting at the age of four, and competed in various single-seater championships in Asia.

Since 2015, Matsushita, who was confirmed as a McLaren development driver in February, has been competing in the Formula 2 Championship with ART Grand Prix, and is currently P7 in the standings with one victory to his credit.

During the second in-season test Gustav Malja will test the C36 on day one, while Matsushita will take over the cockpit on day two.

The outing will be widely seen as the first step towards a full F1 seat for the youngster with the Swiss team as it prepares to use Honda engines from next season.

"When I was four years old, I was fascinated by Michael Schumacher, watching him racing in Formula 1," said Matsushita. "Since then my dream was to become a Formula 1 driver.

"I am very excited about my first Formula 1 test and I am really looking forward to driving the Sauber C36-Ferrari at the Hungaroring, it is a great opportunity for me.

"I hope it will be a productive day for the team as well as for myself, so that I can learn as much as possible. I would like to thank the Sauber F1 Team for making this happen."

"I am pleased that Nobuharu has this great opportunity," added Frederic Vasseur, the Swiss outfit's new team principal. "He deserves the experience of his first test in a Formula 1 car.

"Ever since his debut in Formula 2 with ART Grand Prix, I have been following his progress closely, and have watched him advance his performance from year to year. With this Formula 1 test, he comes one step closer to his dream of becoming an F1 driver one day."