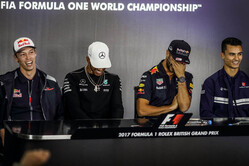 Lewis, four-time British Grand Prix winner, looking to equal the record of five. How have you spent the last few days in the build-up to the race and are we set to get a strong statement from you on track here, as so often in the past?
Lewis Hamilton: It's good to be here. I tried to prepare in the best way I can, quite relaxed the past few days and I've come here excited for the weekend, as always. You've got the championship, which is obviously the most important thing, but a very close second, if not tied, is the British Grand Prix, being a home grand prix, the home of motorsport, such an incredible, intense weekend. Every year it is a must-win for a British driver, so yeah I tried to prepare the best way I could.

Daniel, you looked like you were having fun in London yesterday evening, but you've also been having fun on track with 70 points from the last four races I think it is, second best tally in the field. What does that say about your competitiveness now?
Daniel Ricciardo: It's certainly getting better. The season started slow but we've found some good momentum the last few races. I think Austria was a bit of a breakthrough in a way. It was a third, obviously not as good on paper as Baku, but in terms of actual performance we finished six or seven seconds off the win and there were no safety cars and it felt like really for once this year had genuine pace and we could run pretty much with the pace of the leaders. So that was super encouraging. Last few laps it was looking like it was going to get tight. I'd held that podium spot the whole race and I could see Lewis closing in, so I was relieved to have stayed on the podium when it looked like he was going to come past pretty easily at some point. It felt like from one lap to the next he was in my mirrors. I didn't really have to look in the mirrors most for the race but then I saw a car and I was hoping it was a car that had come out of the pits, out of sequence, and it stayed in my mirrors for a few corners. Then I had a proper look and it was a silver car and I knew it wasn't Valtteri, so I knew we would have a bit on the last few laps but it's been a good run, so we're building.

And last night?
DR: Oh last night, yeah, it was a good event. Look, I'm sure that would have been pretty difficult to organise and get that all going but I felt like it was a success and you know, we had a bit of time on track to try to give the fans what they wanted to see. I doubt they left disappointed.

Daniil, we had a big discussion in part one about the idea of using street promotions and the kind of thing we saw yesterday. What do you think of the idea of putting events on like that and reaching out to fans, in a place like Moscow for example?
Daniil Kvyat: I think it would work - not in January! But in summer yes, I think why not. I mean if every year, once a year, they could rotate this kind of event between one of the biggest cities of the world to promote the sport, then I think why not. Like Daniel said it was a good success yesterday I think. A lot of people there in the city centre of London. It was a cool and enjoyable atmosphere and I think it was nice for sure.

Pascal, coming to you, how are you finding life at Sauber without Monisha Kaltenborn, but with the prospect of Fred Vasseur arriving as the new team principal.
Pascal Wehrlein: I'm looking forward that Fred is coming. I respect him a lot for what he has done in motorsport so far, like in junior categories and last year in Formula One. So, looking forward to working with him and let's see where he can bring Sauber.

Daniel, you're nodding and smiling, as if you're looking forward to this?
LH: It's because he's got an upgrade package!

DR: Ha! We've got more coming later. It's going to be fun. I love high-speed corners. From Turn 9 to 15, Copse to Stowe, it's some of the coolest sequences... probably [the best] mile of race track we go on all year. We got a taste of it, as Lewis said, in Austria. The second, third sector we were carrying some serious speed, so it's a sign of what this weekend is going to be like I think.

(Jon McEvoy - Daily Mail) If they organised an event such as last night's again in London, would you all go?
DK: You mean every day or what? Probably no. But next year again? Why not. Wednesday? Yeah I think why not, of course.

LH: I guess I'll decide when the time comes.

PW: Yeah I would and I would do more donuts, as Daniel did.

DR: That was controlled sliding.

Is that what you told the council?
DR: It's alright... arrest me.

(Ben Hunt - The Sun) Lewis, just in your words, why were you the only driver not there when your colleagues were there and you were missing?
LH: I don't why I was the only one. Everyone had the right to make their decision for themselves. For me, I felt that it's been a pretty intense season so far and I felt for me, I needed to prepare the best way that I could for this weekend. The season's the most important thing for me. That's really it.

(Rachel Brookes - Sky TV) Lewis, just following on, from what you saw of yesterday's event and the crowd that turned out that was there, you're someone who talks a lot about what you get from the fans and how much it helps you. Looking at those pictures and what happened, do you feel that actually being there yesterday might have helped you coming into this weekend and given you a boost a day early even, coming into the British Grand Prix?
LH: I generally haven't been on my phone the last couple of days, I tried to switch off, I switch on a couple of times just to receive a message but otherwise I've tried to stay away from it. Personally, I feel I prepared the best way for this weekend and that's really all I can do. Of course, there are people who have other opinions about it but I'm trying to do the best... it's a very intense season, I'm trying to prepare the best way I can. Other people will have different ways of doing so. I love this Grand Prix, I love this race so I feel yesterday, personally, plays any role in how great this weekend is for me. Every season, for the last years has been incredible, it's been growing every year. You get people who have saved up so much through the year to come up to this Grand Prix and I think you will have seen over the previous years how much I appreciate and respect that and tried to give and enjoy the weekend with the fans and that doesn't change.

(Dieter Rencken - Racing Lines) Lewis, on the same topic, there's suggestions that there has been some sort of disagreement over the use of your image for this particular event, that you wanted to be paid or something like that. Can you refute that categorically?
LH: Yeah, that's... No, I mean I told the organisers last week that I wouldn't be going. I spoke to Toto, informed the team which was very understanding and understood and respectful of the decision. Yeah, I think they used my image so that wasn't a problem.

(Rob Harris - AP) Lewis, first of all, how is flying for what, seven or eight hours round trip to Greece better preparation than staying in the UK? And you were booed by the fans in London, they obviously are unhappy with you, this was a big event, used by the F1 owners to try and engage with fans. You are the biggest British driver. What were your thoughts when you heard they actually booed you?
LH: To be honest, I didn't really know about it. In terms of flying, I don't live here so I wouldn't have been here anyway as I was back in Monaco first, but I fly a lot longer than that for trips and I usually arrive pretty good. But you know, right now my focus is on this weekend, making sure I put every bit of energy into this great weekend that we have and I received incredible love from the fans every single year that I've come here. Yeah, looking forward to seeing them.

(Phil Duncan - PA) Lewis, sorry to keep harping on about yesterday, but do you still stand by your decision and do you think it was the right decision, given you were the only driver missing? You're the home star, you're the home favourite. Do you think you got it wrong?
LH: Well, I mean, like I said, I think I've felt like I've answered as much as I really want to. I'm solely focused on this weekend now, I feel great, being here, I feel the best prepared I could be.

DK: Well, I just drive the car, you know. I think that's what I should be focused on. I think there are other people who know how to do their job a bit better for that.

LH: I don't really have all the ideas. I think there are people who make those decisions.

DR: Probably more locations, where we go. I think we can keep expanding in different parts of the world perhaps. I guess put F1 on the map in places that it's not currently. That can always help to raise awareness of our sport and give people an interest. Yeah, that's something that comes to mind.

PW: I think that after yesterday some louder engines again. It was really nice to hear the old V8 engines, that was great. Hopefully we can have the same in the future again.