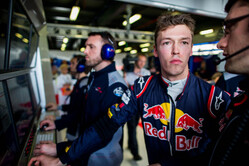 Though handed drive through penalties during yesterday's Grand Prix, Stoffel Vandoorne and Daniil Kvyat were both given penalty points following incidents during the race.

Adjudged as causing the incident which led to the retirement of Fernando Alonso and Max Verstappen, Kvyat, in addition to serving a drive-through, was given 2 penalty points - bringing his 12 month period up to 7 - after the stewards deemed his late braking at Turn 2 caused the collision with Alonso who subsequently hit Verstappen.

While the stewards deemed him "wholly responsible", the Russian said: "Regarding the start, it was a good one, even if I had to suddenly go around my teammate. I then couldn’t see too much of what was happening in front of me; I think Verstappen had a problem too, so Alonso reacted to that – he saw it, I didn’t, so he took a step back while, on the other hand, I lost all my references. I tried to do my best but ended up colliding, unfortunately. It’s upsetting for me and for the others for sure, but these things happen to all drivers."

As for Vandoorne, the Belgian, was adjudged to have "ignored blue flags for at least 2 lap", a cause of concern not only to Kimi Raikkonen but the stewards who handed the McLaren driver a drive-through and 2 penalty points, bringing his total up to 5.