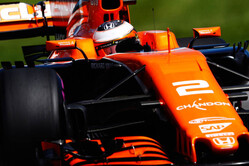 Stoffel Vandoorne finished 12th in this afternoon's Austrian Grand Prix - the sole McLaren Honda to make the finish after Fernando Alonso was shunted heavily from behind at the first corner and was forced to abandon the race on lap one.

All weekend, Stoffel had been pleased with his car's pace and driveability, but was unable to capitalise on its performance this afternoon after spending much of the race running in dirty air and unable to pass the car in front. He earned a late-race drive-through penalty - for ignoring blue flags - which didn't affect his overall position.

With a broken floor, Fernando's car was too heavily damaged to allow him to continue.

Fernando Alonso: "We had a good start again, I was able to benefit from Carlos Sainz and Max Verstappen's poor getaways, so I was already up to 10th when we arrived at the first corner. But the guys behind me arrived at the turn too quickly, didn't brake enough and destroyed my race.

"I was hoping for a good race but we were just unlucky - things were out of my hands; I was just a passenger.

"We know it's always tricky to start from the middle of the pack, but it's just not necessary to gain an extra meter at the first corner. Sometimes, the guys behind risk things a bit too much."

Stoffel Vandoorne: "I'm actually a little bit disappointed with 12th - if you look at the pace we had throughout the race, I think points just might have been possible today. And that's very encouraging.

"Our weekend has generally been quite positive - we had no problems, our pace has been reasonable, and I felt very comfortable with the car. Unfortunately, I was stuck behind some cars and it was impossible to overtake - but that's how it is for us at the moment.

"I got a penalty, but we had to try something, and I don't think I really lost a lot in terms of the overall result. It's a shame we didn't score points today, but our pace all weekend has been a positive for the whole team."

Eric Boullier: "There are always highs and lows in motor racing. Let's start by looking at the positives: Stoffel showed very solid pace all weekend, and he and his team looked to have made demonstrable progress in every session. His race was solid, although he couldn't really show the car's true potential after spending the entire race running in dirty air. We'll take his drive-through penalty on the chin - he was pushing at the time to try and have a go at [Jolyon] Palmer, and it was just an unfortunate consequence of that.

"In terms of the negatives, Fernando's race was one to forget - albeit through no fault of his own. We accept that racing is racing, but these sorts of silly incidents aren't really acceptable at this level. To be walking away with a substantially damaged car after just one lap is a bitter pill for us to swallow.

"Let's finally look to the positives again: we're set for an incredible week in the UK as we head to Silverstone for the British Grand Prix in front of our home crowd. As always, we'll be doing our very best not to disappoint them."

Yusuke Hasegawa: "After a positive start to our Austrian grand prix weekend, I'm very disappointed with the outcome of the race today.

"Despite having some issues, the atmosphere within the team has been much more positive this weekend, and we felt we were in a strong position to score points. Both drivers qualified well and were starting the race from competitive positions, and we were happy with our set-up.

"Fernando had an incredible start and made up a number of positions off the line, but was forced into an early retirement after being caught up in an incident at Turn One.

"I think Stoffel had the pace to score his first points of the season today and looked comfortable in the car, but he fought with traffic for most of the afternoon and was unable to gain positions.

"We will soon be heading back to the UK for our first home grand prix of the season. It's one of the highlights of the year, and we are looking forward to this special weekend. We expect to have many fans, colleagues and family there, so we hope that we can show them a good race."