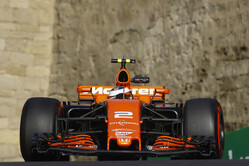 With significant engine penalties for both drivers, and on a circuit not best suited to the strengths of our car, today's qualifying session was always going to be somewhat disappointing.

Fernando Alonso set the 16th-fastest time in Q1, but will start from 20th position. His team-mate Stoffel Vandoorne lines up 19th.

The team has placed extra emphasis on race performance, and with the weekend so far littered with incident, we're hopeful of making progress in what promises to be a long and eventful race around the streets of Baku.

Fernando Alonso: "We did a good job today in terms of preparing for the race: we only used one set of tyres, put in low fuel and did some checks.

"We know we're not competitive around here, but the race is going to be long and demanding. We've seen many mistakes from almost every driver, and we need to avoid making any of those tomorrow.

"In these kinds of grands prix, we need to try and finish the race, get some data for the team, and keep developing the car.

"We need to make sure we keep away from the walls tomorrow. Let's also hope we can end up in the points."

Stoffel Vandoorne: "I think I was always destined to start 19th this weekend! There were no big surprises for us in qualifying today. Our focus this weekend has always been on the race - today doesn't mean too much, really. We always expected to struggle a little bit around here, we've not been on the pace all weekend, so let's just see what happens tomorrow.

"This is a tricky circuit - the long straights mean the brakes and tyres get cool, so the braking zones are very difficult to get right. There are definitely some opportunities to be had out on track - we've seen drivers going off in every session, so we'll be looking to benefit from those."

Eric Boullier: "This afternoon's result was particularly disappointing - we always knew that we'd be towards the back due to the engine penalties both drivers have taken this weekend, but it's never satisfying to be right at the back of the grid.

"Our focus has primarily been on developing a car for the race. While we wanted to go out and put on a decent performance for everyone this afternoon, we knew that the emphasis was always on tomorrow.

"We've seen spills and incidents in every session so far this weekend, so we'll be aiming to capitalise on every opportunity to move up through the field. We are still racers, and we'll be giving it everything tomorrow."

Yusuke Hasegawa: "We expected qualifying to be a challenge today as Baku is a power-hungry circuit with long straights. It was doubly tough for everyone in the team as we knew we'd be starting at the back of the grid with penalties whatever this afternoon's result.

"Despite this, we thought we had the potential to get in to Q2 here; therefore it was disappointing that both cars were out in the first session. We've reverted back to the spec-two engine after Fernando's issue in FP2, but we saw some positive PU power improvements yesterday so I think they would have put us further up the grid.

"We will start from the back of the grid tomorrow but I'm sure that both of our talented drivers will continue to push and do their very best. Also, this is a tricky race track through narrow streets, which might give us the opportunity to capitalise on any opportunity to collect some points."