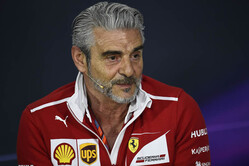 James, we'll start with you if we may. We had a lot of spins today across the field, particularly at Turn Six. Before we go into more detailed topics, maybe you can give us an explanation for that.

James Allison: It's just the track is always a bit dirty here on the first day, and particularly so today - it's very, very dusty, very low grip conditions. Six is a tricky corner, coming as it does after Five. I know that's really fatuous, but it's just an easy place to make a mistake.

So, Mercedes has had a few issues - it's no secret - getting the softer compound Pirelli tyres to work to the optimum, and it's cost you on several occasions now against Ferrari. How much remedial work can you do away from the track using things like simulation tools, and does this issue risk undermining your campaign if you don't get on top of it soon?
JA: I think you need to remember that we've been on pole four out of the six races, and we've won three out of the six. We've been there or thereabouts in all of the races. The car has got many strong points to it, but there is some trickiness in the way that it handles, and that presents us with particular challenges when we're setting the thing up. But there's plenty we can do in the short term, plenty we can do at each race, and also to improve it over the medium term as well.

There's been a lot of talk recently about the fact that Mercedes largely relied on Pascal Wehrlein to do the 2017 tyre development work test last year, whereas Vettel took responsibility for most of Ferrari's work. Do you think that's in any way contributed to the situation?
JA: It's very hard to say, honestly. I should think it has very little effect. What's much more important is the work that we do on the car since the season's started, and to try and improve the car - the real car, on the real tyres - as the season evolves.

Maurizio, coming to you. First Monaco win since 2001, congratulations. But it seems there wasn't much in the way of team celebration after the victory in Monaco. Was that because your message to the team is that the job is still far from over?
Maurizio Arrivabene: We did not have any great celebration after Bahrain; we did not have any great celebration after Australia. As I have said many times, we've kept our feet on the ground, the season it still long. We were happy to win Monaco after many, many years, and for the first few seconds it was something that was somehow historical, but then you look at the calendar, the Formula One calendar, and how many races to go, you put your head down and you start working again.

Obviously very focused in this campaign. I guess one distraction you don't really need is speculation about the drivers. Is it your preference that Ferrari goes forward into 2018 with the same driver line-up?
MA: We are not thinking about contracts now, we are thinking about the championship. They are two separate issues. We are all concentrated. As I have said many, many times we are working all together, including the drivers, we are very focused on our job and I have to say the contract is not an issue.

Guenther, Haas got its first double points finish in Monaco, many congratulations. It could have been more but for Kevin's puncture. What does that say about Haas' progress in year two?
Guenther Steiner: I think it just shows the maturity of our team. We scored the first time, which was... I think we tried quite a long time to do, but especially this year as well, because the midfield is so competitive I would call it, at least for us in our little group we are very competitive, not with the big ones but... It's just the team is working better together. The drivers are working very well together. They push each other obviously, two goo drivers. I think it's just.... things develop. If we keep on moving forward, this is what happens, so we have to try and do it every weekend now.

Giovinazzi's going to drive for you at seven free practice one sessions this season. Tell us about the background and what your plans are for him.
GS: I think we just want to develop a young driver, because in the moment if a young driver wins or is very competitive in GP2, where does he go? And if we don't give these people a possibility to get into Formula One, we end up with no new talent coming through, and we have a technical partnership with Ferrari, so we try to help them with drivers, with development drivers in their camp so we got together and said we'll help people come up the ranks and we will have the stars of the future hopefully. So that is how it came together.

(Andrew Benson - BBC Sport) James, there have been a couple of races this year where Lewis has had particular problems adapting to whatever problems his car has had - I'm thinking Russia and Monaco, obviously. Can you characterise the nature of the problems he's having, please, and whether there's any pattern developing there?
JA: Well, first of all I'll just preface it by saying that if you look up and down the grid you'll see that this is quite common: there are several places where team-mates have strong weekends against the others. There's been a couple where Lewis had a tougher time. What he feels is a lack of grip in the car. What we see when we look at it, and when we talk about it afterwards is that the grip is there, the grip is there, but it's ever so easy to overstep it and to pay quite a heavy penalty in lap time as a consequence. And that experience that Lewis has had on a couple of occasions, Valtteri has had as well, but in a different direction and at a different track. So we have a situation where we have a car with a lot of performance that is able to compete at the front, but the window in which that performance is available is quite narrow and easy to step outside of.

(Ysef Harding - Xiro Xone News): This question's for Maurizio. This Monaco win - what has it done for the team in terms of morale, what has it done back in Maranello, and in terms of just helping to propel this Ferrari team that's come up very strong this season?
MA: Nothing special. As I said, on Sunday they were celebrating and were all happy. And then they turn immediately to the pits, they dismantled the boxes and the day after then they were on their way in Maranello and to be honest with you on Monday morning we have our race debrief and so everybody was focused on the next race. The debrief was about Monaco and the day after we were in another meeting thinking about Canada.

(Silvia Arias - Parabrisas) How much do you think it helped or contributed to this performance this year, the fact that you were training a lot in Barcelona before the season starts - in terms of knowing the tyres?
MA: Everybody was testing. We have our driver, our official driver, the total of kilometres they were doing, I think up to 2000km Sebastian, 1000km Kimi, more or less, 3000km and we always appoint our official driver to do it. Of course, it's helping a lot - but no-one prevents the other teams to do the same, so we have done our job, we throught it was important, taking into consideration the new tyre size and so on. In my opinion there is nothing special on that because we were doing everything. We thought it was the right thing to do. It's no secret.

(Dieter Rencken - Racing Lines) Maurizio, the most successful period in Ferrari's history was when it had a clear number one, number two driver situation. After Monaco, a lot of people seemed to believe that you'd favoured Sebastian, certainly Kimi's face suggested that, Lewis Hamilton said it was clear this was the case. Do you actually now have a clear number one and number two driver or are both drivers treated totally and absolutely equally.
MA: No. I was reading after Monaco and hearing a lot of speculation about number one and number two. I always said that it's not that situation in the team. We are looking forward to the Championship. We do all our best for the Constructors' Championship. To be able to do well in the Constructors' Championship, you need two drivers. This is very important for the house, this is very important for Ferrari. It's the only trophy. That trophy, if you are able to win that trophy, stays at home. The drivers' trophy goes to the driver, of course. I was very, very clear since the beginning of the season in our rule of engagement, the team it's above anything. But, until the numbers, they're not going in one direction or in the other direction - I'm talking about the drivers - no team orders. This is very, very clear. The drivers know about this, they accept it and I think what's happening in Monaco, I was... let me say I was also a bit laughing when I heard all these comments - because it's not the reality. There's no problem in between the drivers. We are looking as Ferrari to the Constructors'. The Drivers' Championship is their job. They are free to do it, until the numbers are going clearly in one direction or the other. In that case, we apply our rules of engagement - but not now, and not in Monaco.