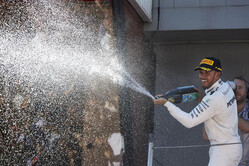 Mercedes driver Lewis Hamilton won the Spanish Grand Prix after a battle that was so close with Ferrari's Sebastian Vettel that the two even touched after the final pit stops. Both stopped twice after starting on the soft tyre, but Hamilton did a middle stint on the medium compound then finished on the soft, whereas Vettel did a middle stint on soft to finish the race on the medium.

Both fought hard on the track as well as in the pits with their different strategies, but eventually finished the race in the order in which they started it on the grid. Conditions remained dry and warm, ending in track temperatures of 43 degrees centigrade.

Only three drivers started the race on the medium tyre, with Toro Rosso's Daniil Kvyat running a medium-soft-soft race to finish in the points from the last row of the grid. Pascal Wehrlein was another points finisher for Sauber, ending up eighth (following a five-second penalty) after stopping just once, completing two roughly equal stints on the soft and the medium.

Mario Isola: "Hamilton sealed victory thanks also to the low degradation and strong performance of the medium tyre that he ran in the second stint; the same strategy adopted by Daniel Ricciardo in third. Degradation and wear was low despite the high track temperatures; demonstrated by the fact that Hamilton set the fastest lap of the race very close two laps from the end with a time more than 3.4 seconds faster than the equivalent last year."

Lewis Hamilton won the race using two pit stops: starting on soft, changing to medium on lap 22, and then going back to soft on lap 37. This was the most likely, but not theoretically fastest scenario, which was predicted to be a three-stopper. The highest-placed three-stopper was local hero Fernando Alonso, in 12th.