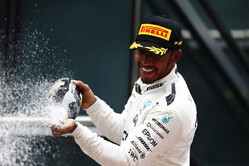 Lewis Hamilton won on a drying track where pit stop strategy was influenced by an early virtual safety car followed by a real safety car in the opening laps. Toro Rosso driver Carlos Sainz was the only driver to begin the race on slick tyres, when all the other drivers started on intermediates and then moved onto slicks within the first 10 laps, using a variety of different strategies with the soft and supersoft compounds. Verstappen used a more aggressive strategy based on the supersoft to make up 13 places from his grid slot at a strategically complex race with plenty of action. After a damp start, the weather remained dry, with the fastest race lap more than four seconds quicker than last year's one. This was a bigger margin of lap time improvement compared to 2016 than that seen in Australia, despite the tricky conditions.

Mario Isola: "The teams had limited information coming into the grand prix, which presented another totally new set of conditions for the third consecutive day. So they had to react to changing circumstances. Despite the runs through the pit lane under the safety car, most of the frontrunners effectively stopped twice showing a limited degree of degradation."