Wolff hints at need for role for Ecclestone 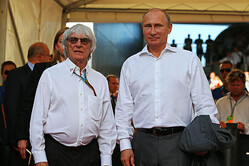 Much like Ron Dennis has seemingly been erased from the story of McLaren - new team boss Zak Brown rarely missing an opportunity in front of a microphone or camera it seems - so Chase Carey and lieutenants Ross Brawn and Sean Bratches are seemingly working hard to confine Bernie Ecclestone to the sport's history.

Though given the title Chairman Emeritus, it will mean little or nothing to Ecclestone, who is very much into 'hands on' management and not the type to do consultancy.

While that may well suit the sport's new owners who have dismissed his 'dictatorial' management style and described the sport as "dysfunctional" and "ineffective", some believe Liberty would be foolish not to take advantage of Ecclestone's skills which have been finely honed during his forty-plus years in charge.

"With Bernie, you never know if he's really gone or if he's going to come back somehow," Toto Wolff told Frankfurter Allgemeine Zeitung.

"However, Liberty has not only gained the majority of shares in Formula 1 but also secured the voting rights," he added. "Chase Carey is the new boss, that is a fact, though Bernie might stay on as honorary president.

"There is a risk that a lot of knowledge is lost," he said, in terms of the new owners pushing Ecclestone out of the picture entirely. "Bernie has developed this series into one of the largest global sports companies in the last forty years. He has made incredibly good deals, we have long-term TV contracts and we achieve great reach because we run on free TV. Becoming part of that is certainly not easy because so much is based on personal relationships that Bernie has built up over decades.

"On the other hand, there are also blind spots where we can improve," he admitted. "We do not have enough in the digital media yet. This is something that is not yet monetised, but as a marketing tool it is of immense importance to attract new target groups."