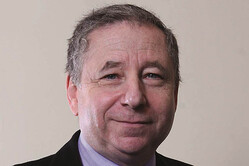 Though he would like to see more unpredictability, FIA president Jean Todt insists "F1 is great".

At a time Chase Carey, the sport's new supremo, is claiming that Formula One is "ineffective" and "dysfunctional", and fans fear another season of Mercedes domination, FIA president Jean Todt insists that all is well.

Whereas his predecessor, Max Mosley, ruled the sport (alongside Bernie Ecclestone) with a rod of iron, for the most part Todt has been invisible for much of his 'reign', instead appearing to concentrate on road safety and the political side of his role.

While the fact that Mercedes has won all but eight of the Grands Prix held under the new hybrid era cannot be put down to the governance of the FIA, surely it must be held partly responsible at a time we are losing a team from the grid and the future of the British Grand Prix is in doubt.

Not so, says Todt, who insists that all is well.

"For me, Formula One is great," he told a sports conference in Dusseldorf. "The championship we enjoyed last year was a fight until the last corner."

Referring to the criticism of the sport from Carey, who suggests that improvments can and must be made, he said: "I think it would be the wrong message.

"If you want to stop the domination you need to be better," he said, a view regularly echoed by Pitpass. "We need to congratulate Mercedes and hope that the others will be able to do something even better.

"There are new regulations this year and the idea is to have cars with more downforce, to have cars wider, quicker. I don't know what that will mean on track, but in my opinion we need to wait not for testing, which will start at the end of the month, but for the first race at the end of March in Melbourne."

Referring to the recent buy-out of the sport by Liberty Media, which should add around £60m to the FIA's coffers, Todt said: "There is a lot of expectation and I'm sure that Liberty Media will allow different access through different means of communication, which could probably encourage new fans to get into Formula One.

"Of course, we will sit as a regulator and legislator of Formula One, with the new people and with the teams to see what should be the vision for the future to make the sport better."