No plan to replace Vasseur at Renault 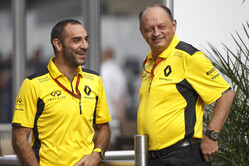 Renault F1 Team Managing Director Cyril Abiteboul has revealed that there is no plan to replace Frederic Vasseur who quit his role as Team Principal with the French outfit on Wednesday.

Vasseur, who ran the highly successful ART GP team before moving to F1 with Renault last year, cited a 'too many chiefs' policy at the French outfit as his main reason for leaving, claiming that there were too many people in senior management roles each with their own agenda - a theme not uncommon in F1.

Speaking in Birmingham, Abiteboul said there are no plans to replace Vasseur.

"The team principal role is something unique from team to team," he said, "as far as I am concerned, we will not replace Fred in the capacity of team principal.

"If we feel we are weakened or held back by the fact we don't have a team principal, we will take action," he added. "But I don't think that this is a necessity at this point in time.

"We have a very strong structure," he continued. "I'm not aware of any F1 team that was able to find the right structure from day one. Red Bull has had changes, Mercedes has had its changes. The business has changed, become more and more complex. In the past, team principals were also team owners, omniscient and knew everything about all the technology involved and had a lot of experience in racing. The level of expertise is now so wide that it is impossible that one man has the full capacity and authority and understanding of everything."

Though unwilling to comment on Vasseur's claims, Abiteboul admitted his departure didn't come as a total surprise.

"We don't feel shocked, we don't feel weakened by yesterday's announcement, which is something that had been discussed at length with Fred."