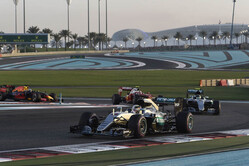 Lewis Hamilton will not be punished for ignoring team orders in Abu Dhabi.

As he eased the pace slower and slower, thereby backing-up his teammate Nico Rosberg into the clutches of the Red Bulls and Ferraris, what began as gentle advice became strict instructions, with technical boss Paddy Lowe eventually ordering the Briton to increase his pace.

Still however, Hamilton resisted, even though in the final laps his own position was under threat from Sebastian Vettel's Ferrari.

Despite talk of possible sanctions, the team has opted to take no further action, no doubt mindful of the fact that it has already lost one of its drivers.

"There is no need to say anything to Lewis," said Niki Lauda. "We have no problem about how he raced in Abu Dhabi. We have drawn a line under it."