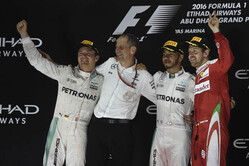 The final race in the era of deliberately high tyre degradation came to an end with Mercedes driver Lewis Hamilton winning the Abu Dhabi Grand Prix, and his team mate Nico Rosberg finishing second to win the drivers' world championship for the first time.

Both Mercedes drivers used an identical two-stop strategy, starting on the ultrasoft and then changing twice to the soft within a single lap of each other on both occasions.

A different strategy was adopted by Ferrari's Sebastian Vettel, who used all three compounds: starting on the ultrasoft, switching to the soft and then ending the race on the supersoft. Vettel was the fastest man on the track in the closing stages, moving up the leaderboard to threaten the leaders and provide a dramatic finish to the race.

The only drivers in the top 10 not to start on the ultrasoft were the two Red Bull drivers. Despite a spin at the start of the race following contact, Red Bull's Max Verstappen was able to climb to second overall before making his single stop. Verstappen was the only one of frontrunners to stop just once, maximising his first supersoft stint to gain track position and eventually finish fourth.

On Tuesday, the final development test for the completely new 2017 tyres will take place, with Mercedes, Red Bull and Ferrari all taking to the track with their modified 2015 mule cars together for the first time. The next wider generation of tyres is designed to provide less degradation, introducing a new philosophy for the technical revolution that will provide even more performance next year.

Paul Hembery: "The decision taken by Red Bull yesterday to start on the supersoft was pivotal to the race today, with Max Verstappen making the most of a creative one-stop strategy to challenge the two-stoppers. Sebastian Vettel also capitalised on the performance of the supersoft to move up in the closing stages. Congratulations to Nico Rosberg for winning his first world title, and we'd also like to take the opportunity to pay tribute to Felipe Massa and Jenson Button, who both ended their fantastic Formula 1 careers today. Now that the 2016 season is over, our focus already switches to next year - starting on Tuesday, when we undertake our final development test for the new 2017 wider tyres, using all three mule cars together for the first time."

Lewis Hamilton won the race using two pit stops, going from ultrasoft to soft on laps eight and 29, as we expected. Rosberg followed an identical strategy, stopping on each occasion a lap later.

Check out our Sunday gallery from Abu Dhabi, here.