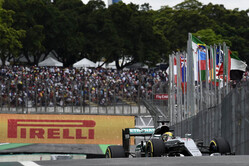 Mercedes driver Lewis Hamilton will start tomorrow's Brazilian Grand Prix from pole position, after setting a time of 1m10.736s on the soft tyre.
The soft compound was used from the start to the finish of qualifying. This means that all the top 10 will start the grand prix on used softs, assuming that it's a dry race.

While the weather forecast remains uncertain for tomorrow, qualifying remained dry in every session. There was rain in the morning though, with wet and intermediate tyres used during FP3 as well as the slicks.

Track and air temperatures were considerably cooler than they had been on Friday, with the session starting under cloudy skies and 21 degrees centigrade ambient, plus 26 degrees on track.

Two stops look set to be the most likely strategy for tomorrow, although there is scope for strategic variation and teams will also look to adapt their pit stop windows to take advantage of gaps in the traffic, which are especially hard to find at Interlagos. With the teams experiencing reasonably high degradation on the soft in high temperatures, those who choose to start on the medium could have a good chance to run an alternative strategy with a longer first stint.

Paul Hembery: "We experienced track and air temperatures today that were a lot lower than they had been on Friday, which consequently had an effect on how the tyres behaved. The rain that fell yesterday and this morning also washed away a lot of the rubber that had been previously laid on the surface, re-starting the cycle of track evolution. With quite a speed margin between the medium and the soft, we saw just the softer tyre used in qualifying. This is what the top 10 will start on, but with variable weather and relatively high degradation on the soft, it's going to be difficult to predict the optimal strategy tomorrow."

How the tyres behaved

Hard: Did not play a prominent role today but could be used with medium in the race.

Medium: Again, absent in qualifying but likely to be a key ingredient tomorrow, if it's dry.

Soft: Used from start to finish in quali with a speed advantage of more than one second over the medium.