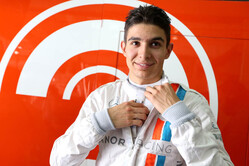 Manor's Esteban Ocon, who this week was confirmed as Sergio Perez' teammate at Force India next season, has been handed a grid penalty for tomorrow's Brazilian Grand Prix.

The French youngster was deemed to have impeded Jolyon Palmer in Turn 4 and as a result was handed a three-place grid penalty and two penalty points - bringing his total to four.

Explaining the decision the stewards said that: "at the end of the Q1, Ocon was on a slow lap having aborted his lap previously, while Palmer was on a fast lap.

"At that time, Ocon was on the radio with his team, who did not inform him of the approaching car. When Ocon did see Palmer, he moved as far as possible to the right to avoid a dangerous situation, but the Stewards concluded these were not mitigating factors, and that Ocon clearly
impeded Palmer."

The Frenchman, who had qualified 20th, will therefore start from the back of the grid.