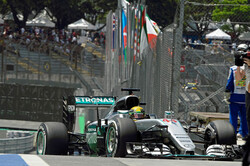 As expected, the infamously fickle Sao Paulo weather did it again this morning, yesterday's warm sunshine giving way to rain and blustery winds.

A session which was declared wet was actually only damp and as a result it wasn't long before drivers ditched the wets and Inters in favour of slicks.

While there was drizzle later in the session, for the most part there weren't any major shocks or disappointments - though an engine change meant that Marcus Ericsson only completed one lap.

Jolyon Palmer did well to finish eighth, while both Ferraris looked a lot better this morning than they did yesterday.

Having been quickest in both of yesterday's sessions, this morning Lewis Hamilton was eclipsed by teammate Nico Rosberg.

If nothing else, unlike the last couple of races, we know that the weather is going to play a part this weekend, if not over the next hour then certainly tomorrow. The fact that it is likely to be changeable only increases the sense of anticipation for we all know that this is often the great leveller.

Consequently, along with the prospect of a rank outsider winning there is the impact this could have on the battle for the championship.

There is late drama at Ferrari where, with ten minutes to go, Vettel's car is on its stands with its floor off, the problem understood to be brake related.

Meanwhile, the drizzle has eased off but the wind has picked up.

Consequently, even if Vettel's car is readied in time, conditions might have worsened to the point that he is unable to qualify.

Hamilton and Rosberg head the queue at the end of the pitlane. They are joined by the Manor and Haas duos, all are on softs.

Despite losing time behind Ricciardo in S3, Hamilton posts 11.511, while Rosberg is 0.304s off the pace.

Verstappen goes third (11.957), ahead of Raikkonen and Ricciardo.

His engine change completed, Ericsson heads out leaving Vettel as the only no-show.

Asked if he needs to "go again", Hamilton is told "negative, we're happy with that lap, so box, box, box".

With 12:10 remaining Vettel heads out - great work by the Ferrari crew.

As Vettel begins his flying lap, teammate Raikkonen reports that it looks like it's about to rain. The German crosses the line at 12.159 to go 5th.

"Box this lap," says Hulkenberg a previous pole man here and currently eleventh. "It's not happening."

With 6:40 remaining only the Manors are on track.

Separated by just 0.005s, the Manor duo head back to the pits.

Button posts a PB in S1, teammate Alonso currently ninth overall. The Briton posts another PB in S2, however a poor final sector means he doesn't improve and remains 17th.

A mistake sees Sainz run wide in T4 though the Spaniard looks to be safe in 12th.

Magnussen improves to 18th as Button complains of oversteer and understeer.

As the stewards announce that they are to investigate an impeding incident involving Palmer and Ocon (no, us neither), the skies have brightened, albeit just a little.

Again, the Mercedes duo are first out, followed by Bottas, Massa, Verstappen and Ricciardo.

"Remember, this is race car set," Hamilton is told.