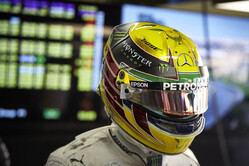 Ahead of today's second session the air temperature is 30 degrees C, while the track temperature is 50 degrees. Though it is warm and sunny, Race Control claims there is a 40% chance of rain.

Lewis Hamilton set the pace in FP1, even quickest when his car sported a massive aero rake on the back.

Max Verstappen was second, ahead of Nico Rosberg, but this was largely due to the two he received as he climbed up the hill to the finish line.

In many ways it was business as usual earlier with no real surprises, though we have yet to see the true pace of the Ferraris as neither Sebastian Vettel nor Kimi Raikkonen tried the soft tyres.

Esteban Gutierrez and Kevin Magnussen sat out the session, their cars handed to Charles Leclerc and Sergey Sirotkin respectively, though the Russian was sidelined by a fuel pressure issue.

The lights go green and Magnussen leads the way, followed by Gutierrez and Grosjean.

As more drivers take to the track it's mostly mediums though a couple are on hards.

Niki Lauda is spotted in the paddock walking into Bernie Ecclestone's office.

In no time at all there are ten names on the timesheet, Ricciardo quickest (13.748), ahead of Vettel, Raikkonen and Alonso.

A strange and rather noisy spin for Ericsson at T8. "I might have flat-spotted my tyres, " says the Swede. Yes, Marcus we think you have.

Although most drivers are on mediums, only Raikkonen and Gutierrez on hards, everyone is struggling for grip.

Asked if he wants to do another lap, Alonso says that contrary to opinion he does not believe its going to rain ("for three hours"). He advises the team to change plan. "I'm happy with that," says his engineer.

A bit of a naughty one from Raikkonen, he cuts across Sainz on the run up the hill, the Finn diving into the pits. Prior to this the Finn had slowed to give himself some space but just as he got going the Toro Rosso passed him.

Twenty minutes in, Ricciardo makes the switch to softs and as one would expect immediately goes quickest in S1. He maintains the pace in S2, finally crossing the line at 12.828 to go quickest by 0.329s having improved by 0.9s.

Raikkonen, Alonso and Ericsson are the next to switch to softs, the Finn going on to post a 13.047 and go second.

The stewards are to investigate the Raikkonen/Sainz incident(s). We say incidents because they are citing what happened at Turns 11, 12, 13, 14 and 15.

As more drivers switch to softs, Alonso goes fifth (13.572). Moments later, Massa posts 12.789 to go quickest, despite a mistake at the start of the lap.

The top three, Bottas, Massa and Ricciardo, are covered by just 0.067s.

Raikkonen and Sainz will be investigated after the session.

Unhappy with his previous attempt, Verstappen gives it another go but a mistake in T8 means he aborts the lap and heads back to the pits.

Rosberg posts 12.301 to go quickest, but moments later teammate Hamilton raises the benchmark ever higher with a 12.271.

Once again, Grosjean is lost. "I don't know what's going on," he wails. "Something very strange is happening in Turn 1."

Hamilton reports that he's happy with his car but feels it could be more aggressive.

As attention once again switches to long runs, this time on the soft tyres that will be used at the beginning of Sunday's race, the order is: Hamilton, Rosberg, Bottas, Massa, Ricciardo, Verstappen, Vettel, Raikkonen, Hulkenberg and Button.

"Stop the car," Alonso is told, the Spaniard immediately pulling off track at T3 and parking the McLaren. Once the car is safely in place he puts a stone under the tyre to stop it rolling forward.

Radio replay reveals that it was an ERS issue, the Spaniard told to jump clear from the car.

Remember it was here that the famous 'places he would rather be' meme came about.

Elsewhere, Kvyat warns that his right-rear is critical. Remember he had a right-rear puncture in FP1.

In the McLaren garage, Button's car is now up its stand, as McLaren's day goes from bad to worse.

Ricciardo advises that he has a "hot warning" regarding his power unit, but is told its nothing to worry about and to continue.