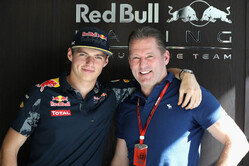 Toto Wolff's phone call to Jos Verstappen has caused a stir in the Interlagos paddock.

It has been revealed that ahead of this weekend's Brazilian Grand Prix, the penultimate race of the season, Mercedes boss Toto Wolff phoned Jos Verstappen to ask the former F1 racer to ask his son not to do anything this weekend that might compromise the fight between the two Silver Arrows drivers for the title.

While Wolff insists the phone call was innocent and not designed to offend or to be seen as a warning to the Red Bull driver, or manipulate the result, news of the call has ruffled feathers.

"I just want to have a great season finale and no controversy because of another car causing a collision and being blamed for having interfered in the championship," the Austrian told Sky Sports.

"I did it probably out of a more holistic approach of sympathy for Max," he added, "but if things are perceived in the wrong way in another team they don't need me, they need a psychiatrist.

"Among my discussion with Jos, we talked through a situation; imagine the title is down to the wire between Lewis and Nico and there is a hard manoeuvre and Max loses it and shunts into one of our guys and the championship is over, he doesn't need that discussion," explained Wolff. "I didn't say don't race them, just keep that tiny little margin of avoiding a collision because that would be very controversial for everyone."

While Red Bull isn't threatening to quit the sport - yet - Christian Horner and Helmut Marko were suitably outraged.

"It's totally wrong," Horner told Autosport. "They've got their own business. To be meddling in other teams', maybe he does that with Ferrari, but he shouldn't do it.

"He's got no right to tell Max how he should drive and conduct himself," added the Briton. "Max is doing a great job and he's employed by us to do the best he can in the races. That's not to wave a Mercedes through or not race it.

"I think Toto showed a certain naivety or arrogance to be calling a competitor team's driver's father," he concluded. "If Toto wants to have a race for his drivers we can do that at 11am tomorrow then we can have the Grand Prix at 2pm where everybody can race."

"It's getting more and more absurd," Marko told Auto Motor und Sport. "If Mr Wolff wants something from us, he should contact the people at Red Bull not the father.

"We are driving our own race," he continued. "It's not as though we're being lapped, in which case you could understand if we are asked to make room."

"As for the phone call, I have never experienced such interference before. To call the father of a driver to manipulate him I think is bad form."

"I haven't paid much attention to the stories of Mercedes talking with Red Bull," said the man at the heart of the matter, Max Verstappen, "Nikki was in our hospitality but he just likes our food and drinks, they are very good. He is Austrian so perhaps just wanted an Austrian drink."

Asked about Wolff's phone call to his father, the youngster told Sky Sports: "I was next to my dad when he called. He went outside, I was watching TV and didn't want to be disturbed.

"I am just here to focus on my job and that is to drive fast for Red Bull, not Mercedes."