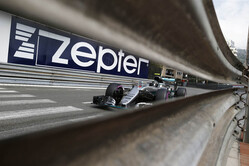 The F1 supremo made the suggestion not only in terms of improving the racing but in assisting the ongoing mission to stop drivers increasing the track limits.

At circuits such as Monaco, Singapore and Sochi, there merest mistake can see a driver come to grief, the barriers nowhere near as forgiving the wide run-offs enjoyed at some circuits. Ecclestone believes that the addition of walls would not only put the onus on drivers to respect track limits but the added sense of danger would improve the spectacle.

"There must not be walls around, because it's expensive if the cars crash there," said Toro Rosso's Franz Tost, bristling at the very idea.

"But we should get rid of all these penalties and all this nonsense, if a driver touches another driver, that he gets done up or whatever," he continued.

"Formula One is also entertainment, and currently, we take too much care about all the safety issues and so on.

"Formula One is dangerous, we know this, but currently at the race track, if you look, nothing happens any more. Some friends said to me 'I don't watch Formula One anymore because there are the two Mercedes in front. If they don't crash on the first lap, the race is gone. I can sleep somewhere else, not in front of the TV.' This is absolutely wrong.

"First of all, we need to come up with a parity between the different teams," he suggested. "The ideal case would be two or three teams would fight for the championship until the last race, Constructors' Championship as well as Drivers', not as the last years when everything is decided with a couple of races to go, before the end.

"We want to have close racing which is why the fans like... which is why we like racing as well," said Eric Boullier, "and I think it's going to come after every change of regulations, especially the last one with the power units.

"Obviously there is a lot of disparity between the cars and the performance but if you're back to 2012 and 2013, I think if I remember, in the first ten races there were nine different winners. And then everybody was complaining that it was not good enough.

"So I obviously don't think a wall will bring a solution and it's expensive to build as well. I think it's just making sure we can bring the regulations to a point where we can give a chance to every team to be competitive and if you have all the cars, all the drivers competitive, then you can have very good and close racing."

"In all the things that Bernie says there is a message," said Force India's Bob Fernley, "and I think that message is that we need to get a little bit more excitement into the racing itself.

"I think there are ways that we can deal with cars going off, track limits and things like that and give opportunities for drivers behind by de-rating or whatever. That technology is available.

"I think we could do a lot more to get it more exciting without endangering the drivers in any way, or without making the tracks so they are F1-specific because we've also got think that a lot of these tracks are also doing MotoGP as well, so whatever we do has to fit in with those as well.

"So yes, there are things we can do but I think Bernie's message is let's get it a little bit more exciting."

"We need close racing, for sure," said Dave Ryan of Manor, "but if we had a fairer distribution of funds, our cars would be closer together, that would be a start.

"But Franz says is absolutely right. The drivers are over regulated on the track, some of the recent decisions and points and reprimands and so... personally, I think they are just too far.

"The drivers are discouraged from actively racing and some of the incidents that have been penalised I just don't get, it's just racing and you're just not allowed to do it now.

"The blue flag situation is also frustrating and I'm not so sure that the blue flag adds much to the racing. For sure it aids the lead cars but it really disrupts the racing for the guys at the back and we're all part of it.

"So I think we need to look carefully at how the sport is regulated when it comes to racing, would be a great help, and if the drivers were allowed to be themselves. There's not many drivers who aren't more than the corporate figurehead of the company. They're not allowed to express opinions, or they are discouraged from it. I can understand that side of it but it would be nice if we had a few more personalities. Lewis gets criticised for what he does. Well, why? He's just out there doing his thing and if we had a few more drivers doing that sort of thing I think it would add to the sport."

While the drivers roundly poo-pooed Ecclestone's sugestion, one driver it did find favour with is Daniel Ricciardo.

"It's tough because we always talk about safety but I think walls are actually pretty good," said the Australian. "Even like Monaco, if you slide into the wall it's just there and that's it. I like the idea of walls that they are a permanent thing.

"It's like Lewis in Monaco when he was defending me and cut through the chicane, if there was a wall there, happy days, I win the race. I'm not a fan of the real open stuff, at least have something there that is a deterrent."

As for exceeding track limits...

"We always talk about it in driver briefings," he said. "Whether it's bringing some gravel back on to the track or these sort of speed bump kerb things are doing the job in some areas. So it's improving, but I think it's more when a driver can just run off wide and come back on track and not really pay a penalty.

"That's where it's a bit where you should at least have some penalty to pay. At the end of the day if you go off wide, you lock a brake or whatever but you've missed the apex, you've made a mistake so you should lose some time. I think that's the thing that frustrates me more, it allows too many of us to be less than perfect and it makes us look less good as well if we're always making mistakes and not paying any penalty for it."