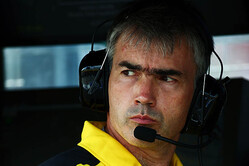 Cyril Abiteboul, managing director: We might not have scored points in the Japanese Grand Prix, but our upward trajectory continued. On pure pace alone we were able to overtake and out-race Toro Rosso and McLaren while we were fighting with Williams for the race duration. It's very positive to see we can genuinely mix it in the midfield and that we are there, ready to take advantage of any opportunity.

We are now entering the final four races of the year in a positive frame of mind. Things are moving in the right direction on track and off track our plans are beginning to take shape as well. We are starting our extension of Enstone very shortly and the new recruits are coming in steadily after our recruitment drive at the start of the year. We also announced the first of our drivers for 2017, Nico Hülkenberg. We are delighted to welcome Nico - he's experienced, yet still hungry for success and should complement our plans perfectly. Certainly we're looking forward to working with him in 2017 and beyond. It's an exciting time for the team all round.

The Japanese Grand Prix didn't yield any points but it was a strong performance from the team. How would you review the weekend as a whole?
Fred Vasseur: It was our best weekend in terms of performance even though we didn't score points unfortunately. We had a very strong FP3 on Saturday morning and even though we missed out a little in qualifying, in the race we were able to overtake Toro Rosso and McLaren and not be too far away from the Williams. In terms of pure performance it was certainly our best weekend so far this season. It confirms the progression we have made since June and how we have been able to maintain it.

Would you say that those teams are our closest competition at this point in the year?
FV: In Japan we overtook Toro Rosso and McLaren and were much closer to Williams than we have been in the past, so we have raised our level in the race. What is clear is that we need to improve in qualifying to have a stronger baseline with which to start the race, and then hopefully the results will follow.

Are the drivers responding well to the improved performance?
FV: Jo did a very good race. We had quite an aggressive strategy in that he only made one stop and had to look after his tyres. Kevin was also able to make up positions and fight, so they both have confidence in the car and are able to use it effectively now.

How is the team morale now with four races remaining of a very long season?
FV: The last results, independent of the points scored by Jo or Kevin, have energised the team. It confirms we are moving forward, which is always very positive. Even if tenth place is not where we want to end up long-term, it is progress and that is always encouraging for everyone. The last four races are physically tough, but we're up for the fight.

Last week the team announced the first of the 2017 drivers. What made you go for Nico?
FV: Nico is one of the drivers that has really made his mark, with in particular a GP2 title in his first year in the series. Only three drivers have done this so far: Nico, Nico Rosberg and Lewis Hamilton. He has succeeded in everything in his career to date, including Le Mans. He is also a real leader and able to motivate a team and take the troops with him. He has a lot of experience and is very fast; that is very important for us in this stage of our development. From a technical perspective, an experienced and conscientious driver can give precious feedback as well as knowing exactly what they want from the car. This allows the team to work fast and efficiently. We are really happy to have him with us.

Despite most of Enstone's attention on next year's car there's still scope to progress on track with the R.S.16 as Technical Director Nick Chester explains.

What's the technical approach to the US Grand Prix?
Nick Chester: It's all about maximising what we have. There are a few minor aero bits we will have on the car that are just the final elements of the R.S.16 development programme. In addition we are making progress on set-up and tyre management, especially tyre management for qualifying.

Should the Circuit of The Americas show us some good ol' fashioned US hospitality?
NC: There's nothing about the layout to cause alarm for our car so looking at the simulations we could have a decent race. It's a nice smooth circuit with a high-speed first sector incorporating a lot of fast-flowing corners - the type of which have turned out okay for our car of late. If you look at the rest of the circuit too we are predicting a Sepang / Suzuka level of performance from the R.S.16.

How was the debrief from Japan?
NC: Japan was a slightly unusual one as we were competitive in a lot of the sessions but not in qualifying, which is something we've been analysing. FP3 was particularly decent, our qualifying was sub-par, then the race pace was pretty respectable. Race pace was encouraging once more and if we can improve qualifying - as we have seen at certain races this year - and maintain the race pace we should be fighting for points for the remaining races.

What are the targets for the final four races of the season?
NC: Points and progress. In terms of programmes we have different set-up evaluations to conduct and we are always looking at aspects relevant to our 2017 project, but we're still focused on obtaining the best results possible at every remaining race.