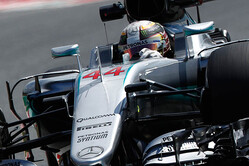 The highest track temperatures in recent memory were recorded at Sepang in Malaysia at the start of FP2, hitting the 61 degree centigrade mark.

Track temperatures fluctuated throughout the day, which had an effect on lap times as the drivers and teams completed qualifying simulations and longer race runs, using all three of the compounds available: hard, medium, and soft.

The main focus of the work today was to understand the new asphalt at Sepang, which has smoothed out all the bumps and altered the racing line, as well as making the surface less abrasive. So far, the track seems quite a lot quicker, with the fastest lap times today already smashing the fastest times of the entire weekend last year.

However, it was quite hard for the teams to get an accurate picture of wear and degradation, due to time lost in FP1 following a red flag, variable track temperatures, and track evolution. Adding to the complication is the fact that qualifying tomorrow takes place in the late afternoon, three hours after the FP2 start time, meaning that today's data is not necessarily representative. Also, the weather could turn cloudier for the rest of the weekend, with a risk of rain on race day.

The fastest time of the day was set by Mercedes driver Lewis Hamilton in FP2, who set a 1m34.944s on the soft tyre: around 1.3 seconds faster than the medium at the moment.

Paul Hembery: "The new asphalt in Malaysia seems to be quicker, and despite the hottest track temperatures seen in recent memory, all three of our compounds here stood up extremely well to the punishment, allowing times that were sometimes nearly five seconds faster than the equivalent sessions last year. But with the chance of different weather conditions for the remainder of the weekend, there are still a number of complex variables left to play out, which makes planning the strategy quite tricky at this point."