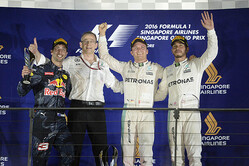 Well done Nico, fantastic. Your 200th grand prix, your third victory in four weeks, you now lead the championship again, but it wasn't all plain sailing.
Nico Rosberg: No, but it's been an awesome weekend here in Singapore for me, already yesterday with the pole lap and then today, a great start, had a good car in the race. Of course Daniel tried to pull one up on me with the pit stop in the end there. We knew it was going to be tight at the end, but it worked out, so I'm really, really happy.

They were going to call you in to cover him off and then they made a late call, and it was the right call, but then you were under pressure all the way to the flag?
NR: Yeah, we couldn't come in because I had traffic, so I was very slow on that lap and he would have beaten me. It was a cool ending.

We heard you were managing your brakes for more or less the whole race, tell us about that.
NR: Yeah, the whole car was on the edge, it always is in Singapore, so it's all the more satisfying with a race like that.

Daniel Ricciardo, it's your third consecutive time on this podium, but you needed just a few more centimetres for the top step.
Daniel Ricciardo: Yeah, we've come very close this year on numerous occasions but you know, I'm not going to stand up here and be disappointed. I think we gave it a good shot. We tried something at the end with the strategy and we got within half a second. It was close but hey, we're up here again; it feels great. There are a lot of Australian flags, every year I see more and more, so thank you very much.

You were on schedule to be on his gearbox with one or two laps to go and then he got a bit of traffic but it just fell away. One more lap and you would have been there.
DR: Yeah, it was close. As soon as we did the pit stop we thought Nico was going to come in, so I pushed really hard on those tyres and by the end they were a little bit dead, but at least we close and made it exciting.

The champagne pouring off you is boiling hot - a tough race.
DR: It's a physical race, absolutely.

Lewis, it's your 99th podium but it's not the sweetest one I suspect.
Lewis Hamilton: No, definitely not, but first of all, big congratulations to Nico, he drove fantastically well all weekend and fully deserved the win. Very tough day today, as always it is here in Singapore. This weekend has just been a bot of a tricky one for me, but I'm still glad I could get back up on the podium and get some points for the team.

The first half of the race you were a bit frustrated with the tyres and your own pace and wondering what was going on and then suddenly you came alive.
LH: It was my brakes. I was struggling with my brakes, they were way overheating, so I just had to slow down, so I just had to watch the other guys pull away and I was just looking at different ways to try and get them back under control. Eventually once I did my second or third stop, all of a sudden my brakes were under control. But of course, towards the end I still got a bit of heat in them. I have a lot of support here this weekend and I just want to say a big thanks to everyone for coming out and we'll keep pushing.

Eight points behind in the world championship now, is that a big concern for you?
LH: Well, it's a lot different to when I was here last year, but in all in all, with everything that's gone on this year, I'm still in the fight, there's still a long way to go and I'm going to give it everything I've got.

Final word then Nico - six races to go in this championship, you are leading it yet again now, so you must be thinking 'I can win this, I can take this'.
NR: No, I'm not focused on points. As I always say, I'm just happy with the win today. Thank you very much for coming today, you've been awesome this weekend, I hope you had fun and see you all again in Malaysia, soon.

Nico, many congratulations, you've won your 200th Grand Prix, it's your 22nd Grand Prix victory and you've now got an eight-point lead in the World Championship. It was a brilliantly judged race - but were there a few nervous moments as the man on your right was closing in?
NR: Like with ten laps to go, or 15 laps to go, just after the pitstop, the team said he would be with me at the end of the race, which was the case, so for sure I had to be on it in that last stint and get everything right and nail all those laps. It really worked out, with the management, all the way to the end. The tyre lasted just right, so very, very happy, of course. By the time I started the last lap I knew it was going to be enough because Daniel also, his tyres weren't as fresh any more, so by that time it was OK.

Daniel, coming onto you. It was a brave roll of the dice at the end in terms of strategy. What are you feeling now? Just one more lap - or do you think you could have done anything differently?
DR: No, I don't. I'm sitting here pretty happy because I felt I did all I could. The perfect race. If there was anything that could have been more perfect it was the start but Nico got off the line well. So, even with an amazing start we wouldn't have got the jump. It looked like his was near-perfect. From that point we just tried to do what we could. Team put me on a three-stop at the end. It was fun. It was good to push the whole race and I knew I would get close to Nico at the end. So even if the track's difficult to overtake, it was nice to be able to push to the last lap and know that I was at least putting some pressure on him and giving the crowd still a little bit of hope.

Lewis, coming on to you. It was nip-and-tuck between you and Kimi throughout the race. How surprised were you that they called him in after you made your final stop?
LH: The team suggested they would do the same. To be honest we were both struggling with... we were both pushing quite hard in that stint and we both would have not made it to the end at the pace we were going, and so I kinda knew I was just pushing on my out-lap to see if I could undercut him, which fortunately we did.

(Lennart Wermke - Bild) Nico, first of all congratulations, brilliant drive. There was a little incident with an over-ambitious marshal on the track at the very beginning of the race. I think you were driving towards him. Can you describe to us what happened and what did you see in this moment?
NR: Yeah, that was pretty hairy, for sure. I think just as we didn't expect the restart, he didn't either, I think, because the restart was somehow pretty abrupt. But he got out of the way just about in time so it was OK. Of course we all had to drive a bit carefully through there.

(Dan Knutson - Auto Action / Speed Sport) Nico, a couple of days ago you told us, 200th race, not that big a deal. Is it now - or will it be one of your big deals?
NR: Yeah, winning the Singapore Grand Prix today is awesome. I'm really, really happy about that. The whole weekend went perfectly, so yes, today it's a big deal. Tomorrow, not so much.

(Michael Schmidt - Auto Motor und Sport) To the Mercedes drivers, we heard over the radio your team was giving you warnings because of the brakes. Can you tell what happened and did these brake problems accompany you the whole race?
NR: Yes, the brakes were just on the limit. But we know that, it's expected and it worked out fine. Yes, it's right on the edge so it was not easy to manage throughout the whole race.

Lewis, do you have anything to add?
LH: Same as Nico. I guess the things that pops to mind is how much worse it's going to be next year when we've got a heavier car. It's a shame the cars are as heavy as they are because we can't push, you can't race very well when you're behind people here - but that's maybe just the circumstances of this race.

Daniel, can I follow up on that. Did you have any brake problems?
DR: Nothing in particularly. You do get... towards the end of the race you feel sometimes the pedal get a bit longer, so you know the brakes are wearing but we never got into a critical phase or I never really had to manage it. We came in expecting a few issues but it was actually pretty good.