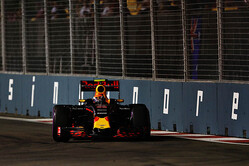 The F1 circus said goodbye to Europe with Lewis Hamilton leading teammate Nico Rosberg by just two points, and with the Briton fearing that the issue is not yet resolved one wonders what the next few races have in store for us.

It's fair to say that last year's Singapore weekend is one that Mercedes, and in particular Hamilton, will want to forget, the German team suffering a catalogue of errors.

Even if Mercedes has learned from its mistakes, many fancy Red Bull this weekend, with Daniel Ricciardo widely tipped to open his 2016 win account.

While we don't expect the intervention of the weather gods, fact is, Singapore is a great leveller and has produced more than a few surprises over the years and we expect that to be the case again this year.

There are no reserve drivers in action today, for obvious reasons.

The Faenza team is running back to back tests this morning, with Sainz and Kvyat trying the old and new aero packages as the Italian outfit tries to discover what has gone wrong in recent races.

Also, despite attention now almost fully focussed on 2017, a number of teams are still bringing updates, none more so than Haas which has a new front wing together with modifications to the floor and the brake ducts.

McLaren is running a new front wing, so no surprise that it is smothered in flo-vis.

Being a street circuit the ultrasoft tyres are back, along with the supersoft and soft.

As was the case in Belgium and Italy, a number of drivers are trying the halo in this session, among them Alonso and Hamilton.

The lights go green and Grosjean leads the way, followed by Palmer, Gutierrez, Alonso and Vettel.

A good mixtures of ultras and supers, while the Force India duo stick to softs.

Just a couple of minutes in and Button is travelling very slowly. "It's stopped," he sighs, "we're not going to make it back". The McLaren grinds to a halt, just a tantalising 100 metres from the pitlane entrance.

As the car is pushed to back to the pitlane - a rare bit of good luck for Button - the VSC is deployed.

Once everyone has completed their installation runs and returned to the pits, the two Mercedes drivers head out.

As Gutierrez becomes the third driver to posts a time (50.744), Sainz clouts the pit-wall with his front wing as he leaves his garage, damaging the endplate. To make it worse, the Spaniard is running the updated package.

Raikkonen goes third (49.391), ahead of Gutierrez, Bottas, Massa and Perez.

Hamilton must really like the Halo, he's already completed 6 laps with it, more than most of the other drivers who have tried it this far.

Rosberg improves but remains 0.307s off his teammate's pace.

Raikkonen improves with a 48.770, but remains 1.4s off Hamilton's pace. Moments later, teammate Vettel posts 47.731 to split the Mercedes duo.

Ricciardo improves to fifth with a 48.096 but is demoted when teammate Verstappen posts a 47.467 to go third.

"I brushed the wall at the exit of turn 22/23," admits Vettel, "but it's just cosmetic". The fact that the "brush" resulted in a mighty shower of sparks from the right-rear of the car suggests it was more than "cosmetic".

Cosmetic or not, he improves with a 47.375, meaning that he Hamilton and Verstappen are covered by just 0.098s.

A 47.335 sees Verstappen go quickest, putting 0.034s between himself and Hamilton.

Back on track, Button immediately improves to ninth with a 49.615.