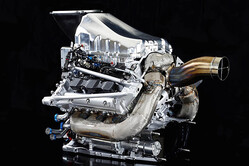 With sixth placed Toro Rosso just 3 points ahead, McLaren is seeking to overhaul its Faenza rivals who are using the 2015 Ferrari.

And while, like most teams and engine manufacturers, attention is now has now shifted to 2017, Honda is looking to introduce two further upgrades as it tries to put the nightmare of 2015 behind it.

The Japanese manufacturer, which has tended to introduce its upgrades tactically, last upgraded its unit for Silverstone leaving it with ten of the infamous tokens.

The Silverstone update, which followed the upgrade for Canada which saw new turbochargers fitted, related to the intake system on the ICE (Internal Combustion Engine) and was aimed at improving combustion efficiency and power output.

Both of the forthcoming upgrades are expected to be focused on the ICE, which it is widely believed is the Achilles heel of the current package.

"Sakura is always developing, so as soon as we are ready, we will introduce it," technical boss Yusuke Hasegawa told Autosport. "We only have nine races, so even if you have an idea, we only have two chances to introduce it. So we have one chance at Spa and one more after that and the plan is still to use all of the tokens."

However, the upgrades compromise the Japanese manufacturer's schedule in terms of switching full focus to 2017.

"This is the biggest job for me," Hasegawa admitted, "deciding when to divert resource from this year to next year. So far, I won't give up on this year, but maybe this month, I have to decide.

"After September, the research will stop," he added. "We will have dyno testing in October and November but we will have no research for this year after that."

Far from leapfrogging Toro Rosso, Hasegawa admits he hasn't entirely given up on catching Force India and Williams.

"I'd like to be the fourth team, Mercedes, Red Bull, Ferrari and the McLaren-Honda," he said, referring to a scenario which though difficult enough to imagine today would have been laughed out of the paddock a year ago.

"It's difficult to measure the level of performance, but we want to repeat the Hungary situation. If we can achieve that level, we have to be satisfied and maybe with some luck we will get the chance to get a podium."