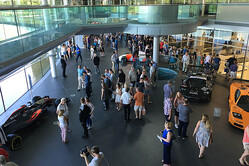 Over three thousand people turned out for the sixth McLaren Employee Motor Show, proudly hosted by the company at its McLaren Technology Centre on Saturday.

Run for current and former employees, their families and invited guests, the event has grown since its inception in 2010 and has become an important fixture in the company's and town's calendar.

Over 200 exhibits were showcased - both four-wheeled and two, many of which were volunteered for display by employees themselves - including former racing cars from a wide variety of series, road-going vehicles and kit cars and a number of Surrey Police patrol cars.

In addition to the cars and bikes on display, event goers enjoyed other activities including bicycle stunt displays, a race simulator, a pit stop challenge, helicopter rides, and photo opportunities with McLaren's Formula 1 and road cars.

As well as providing a fun day out and a rare glimpse for family members inside the world-famous McLaren Technology Centre, the event helped raise vital funds for local good causes. Beneficiaries include The Peter Jordan Fund, which raises money for The Brain Tumour Charity, and SATRO, a charity that encourages young people to take up careers in STEM (science, technology, engineering and maths) subjects - an area McLaren supports year-round through its STEM Ambassador network of graduates who talk at schools and colleges. Both good causes will receive proceeds from the purchase of event tickets.

Visitors were also offered the opportunity to meet team members from all McLaren companies, see a Pure McLaren garage set-up in the flesh - an experience usually reserved exclusively for McLaren owners - and see close-up an exclusive historic collection of McLaren's very own iconic Formula 1 and CanAm cars displayed on the famous Boulevard.

Younger visitors were also treated to a bouncy castle, softplay and face painting.

Among invited guests were local dignitaries including the Mayor of Woking Councillor Anne Murray and Woking Borough Council Chief Executive Ray Morgan. Also in attendance were a small group of lucky Team McLaren fan club members who bought exclusive access to the event.

"As McLaren has grown, so has the Employee Motor Show, which is a fun opportunity for employees to showcase their passion for all things cars, racing and technology to their fellow colleagues and families," said Simon Wait, from the employee-led McLaren Activities and Charities Group which put together the event.

"There's been huge support for this year's event which is run by and for employees, many of whom have moved to or live in the surrounding area. A huge amount of time and hard work has gone in behind the scenes, along with support from the company, to make it such a success - for which we are incredibly grateful to everyone involved.

"It's a privilege for McLaren to give something back to our employees and an opportunity for them to proudly show their families and friends where they work. Most importantly, we're proud that through this event we're able to support two very important charity organisations close to our heart, who will benefit directly from the generosity of our people."