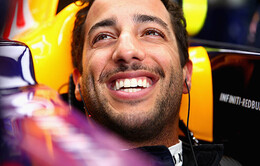 While others gesticulate, use expletives or call for the services of Charlie Whiting when they encounter back-markers - some using all three - Daniel Ricciardo, as you might expect, has a somewhat different approach.

Running behind the Haas driver yesterday, the Australian told his team: "he's one of my favourites, I love this guy".

Subsequently asked to explain the comment, which had clearly been made in the heat of the moment, Ricciardo, somewhat sheepishly, explained: "To be honest, off the track, I have no problem at all with Esteban. I think he's actually one of the nicer guys - but just on the track just lately, it's come up the last few races that a few of us haven't been that impressed with the blue flags.

"We've discussed it in drivers' meetings," he continued. "I've been in the position and I know it sucks, it sucks to move out of the line and let the leaders through - but it seems particularly the last three races in a row... everyone is doing an OK job and it seems like he's doing a less good job than the others.

"A bit of frustration obviously. I was trying to say it as politely as possible but, yeah. I think because he's been told already, he knows that a few aren't that impressed with his blue flag handling. I thought by now the message would have gone through but for me at least today... I lost more time behind him than anyone else."

Told of the comments, the Mexican, who finished just outside the points in 11th, one of only five drivers on a two-stop strategy, said he was surprised.

"Daniel was not happy? Really? I will speak to him," he said. "I am surprised because I saw he was behind but he was pretty far away at that time.

"At some point I lifted and I lost about two seconds," he explained. "Usually I do my best. It was not my intention to block or anything, but if he is not comfortable with it, I am going to speak to him and try to get it better because it is not my intention to do anything bad to anyone.

"I am actually often told by the team that I am too easy, so I said okay, I am going to try to do my best and lose the least time possible," he revealed.

"It is part of the race, you are fighting, and you are doing your best. I was on supersofts at that moment. He was catching me very slowly and when I saw he was one second behind or something like that, I backed off and let him by in Turn 2.

"It is confusing but I am going to speak to him. But you have to understand they have to put themselves in my position. I am doing my best and it is not that I didn't let him by. I was just waiting for him to be a bit closer, and I lifted completely and let him by in Turn 2."

In Hungary last week, the Mexican was equally surprised when he was given the 'middle finger' by Lewis Hamilton.

Speaking at the start of the weekend, Sebastian Vettel, who has a reputation for having zero tolerance in terms of back-markers, insisted that it was nothing personal and only in the heat of the moment.

"I think it's emotions," he said. "I think in the race you want to... I was catching Daniel at the time, I believe, and yeah, it always feels that you're losing more time than the guy in front which I don't think is true.

"I have been in the other situation as well. It's not easy, you know. The mirrors are small, you see the car coming and two or three corners later the car is a lot closer and maybe closer than you expect. Equally you're racing someone, you're doing your own race.

"I think in that moment I was a bit emotional and complaining. After the race I was a lot more relaxed about it, maybe I got a bit tempted by Max in the last couple of races so I started to complain a lot about blue flags during the race. But yeah, i think we're all trying to do our best and I think most of the guys most of the time do a very good job, especially because it's not easy and it's not a nice position to be in. I think we all come from a racing background where we were not used to seeing blue flags and especially not used to moving over so it is a pain but people are doing what they can."